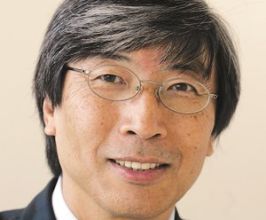 Book Patrick Soon-Shiong for your event

Patrick Soon-Shiong, MD, a physician, surgeon, researcher, philanthropist and scientist, invented and developed the revolutionary drug Abraxane, which has received FDA approval for the treatment of metastatic breast cancer, lung cancer and advanced pancreatic cancer. Abraxane is the only drug of its kind to be approved in first line therapies across this broad spectrum of tumors in both the U.S. and E.U. Over the course of Dr. Soon-Shiong’s career, he has pioneered novel therapies for both diabetes and cancer, published over 100 scientific papers, and has issued over 230 patents worldwide for groundbreaking advancements spanning myriad fields of technology and medicine. As a surgeon, Dr. Soon-Shiong performed the world’s first encapsulated human islet transplant, the first engineered islet cell transplant and the first pig to man islet cell transplant in diabetic patients.In the early 1990’s, Dr. Soon-Shiong pursued the science of stem cell and nanotechnology at NASA, performing experiments as part of the Shuttle program. Soon-Shiong’s path to cancer research began while doing research for NASA that involved harnessing stem cells to make insulin.From 1997- 2010, Dr. Soon-Shiong served as Founder, Chairman and CEO of two global pharmaceutical companies: American Pharmaceutical Partners and Abraxis BioScience. In2008, Dr. Soon-Shiong sold American Pharmaceutical Partners (NASDAQ: APP) to Fresenius for approximately $4.6 billion and in 2010, sold Abraxis Bio Science to Celgene for approximately $3.8 billion.In January 2016, Dr. Soon-Shiong announced the formation of Cancer Breakthroughs 2020, a comprehensive collaboration of researchers, insurers, academic institutions and pharmaceutical companies that seeks to accelerate the potential of combination immunotherapy in the treatment of cancer. The initiative has a goal of initiating Phase 2 trials in 20,000 cancer patients within the next four years in addition to launching a revolutionary molecular diagnostic test. Known as GPS Cancer, the test enables analysis of the whole genome and target proteomics, transcending genomics to the era of clinic proteomics in cancer.Dr. Soon-Shiong currently serves as Chairman and CEO of NantWorks, an ecosystem of companies aiming to create transformative global health information and next-generation pharma development network. Under the NantWorks umbrella, Soon-Shiong also currently serves as Chairman and CEO of NantKwest (NK), a Nasdaq listed immunotherapy company focusing on Natural Killer cells, and Chairman and CEO of NantHealth (NH), a Nasdaq listed transformational healthcare company converging biomolecular medicine and bioinformatics with technology services to empower physicians, patients, payers, pharma and researchers to transcend the traditional barriers of today’s healthcare system.Dr. Soon-Shiong is Chairman of the Chan Soon-Shiong Family Foundation and of the Chan Soon-Shiong Institute of Molecular Medicine, a non-profit medical research organization. He co-chairs the CEO Council for Health and Innovation at the Bipartisan Policy Center, is the Executive Director of the UCLA Wireless Health Institute and is a member of the Global Advisory Board of Bank of America. He also is an Adjunct Professor of Surgery at UCLA, a visiting Professor at the Imperial College of London, and a Professor of Microbiology, Immunology & Molecular Genetics and Professor of Bioengineering at the California NanoSystems Institute of UCLA. The Friends of the National Library of Medicine has honored him with their Distinguished Medical Science Award.In April 2016, Dr. Soon-Shiong received the Franklin Institute Award for his visionary leadership and commitment to advancing medical and scientific research and bringing new treatment options to cancer patients. Dr. Soon-Shiong was also honored at the Vatican in April 2016 and received the 2016 Pontifical Key Visionary Award. The award recognizes “medical innovators who change the course of history and reduce suffering on a global scale by blending visionary thinking with real action”.Contact a speaker booking agent to check availability on Patrick Soon-Shiong and other top speakers and celebrities.