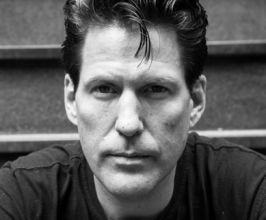 Book Paul Gerard for your event

Poet, artist, writer, punk rocker, and now renowned chef, Paul Gerard got his start early traveling the culinary globe throughout his childhood, without ever leaving the 20-square blocks of South Brooklyn, New York that he grew up in – Mecca for the city’s immigrant community.At 13, Gerard started working in local restaurants as a busboy. When told that his hair was too long for the front of the house, he moved to the kitchen. It was an exile that would change his life. The kitchens of New York in the Eighties were home to many misguided miscreants, who could only find refuge in the city’s basement kitchens. Here they felt most at home. They cooked because they loved it. They worked like dogs and partied like rock-stars. The dark counter culture took Paul right along with it. He climbed the ranks from dishwasher to prep cook, from sauté to grill. Mentored by the bohemian vagabonds of the underground food world, Gerard soon grew – both as a cook and as an artist, approaching food as he did his art: studying, practicing, and reveling in every bit of the suffering and craftDetermined to push every limit, at barely 20, Gerard’s desire to discover a life outside New York saw him heading South, to New Orleans. His less than safe and legal lifestyle found fertile ground there. For 13 lucky years he honed his skills under some of the greats: Gerard Maras and John Besh before working his magic at Susan Spicer’s Bayona – where his time there is still referred to as the restaurant’s “Golden Era”.After a long haul in The City That Care Forgot, Gerard returned to NYC in 2005, shortly before Katrina devastated the region. Back in Brooklyn, Gerard took the position of Chef at Sweetwater, the former punk rock bar turned gastropub. With his “superb kitchen talent” (New York Magazine) Gerard transformed this uncharted Williamsburg establishment into a destination for all five boroughs.Now getting much attention from the culinary world, Gerard was persuaded by Chef Todd English to join his management team, where he was first introduced to the large-scale, corporate side of the culinary community – adding a new set of skills to his eclectic resume. Hired as Executive Chef for China Grill Management he was responsible for opening various multi-million dollar establishments all over the world. Next came the position of Executive Chef at The Soho Grand Hotel, followed by a successful stint in the same role at the international members club, Soho House, where he spent two years revamping their NY kitchen and menu.Always looking for new challenges, and now ready to captain his own ship, in early 2012 Gerard decided to return to his roots and open a small, sexy restaurant that would inspire his more creative side. As owner and Chef of Exchange Alley in the East Village, Gerard created a place that encapsulated the very essence of the underground scene of the New York of his youth. Keeping things local (sourcing only from the best farmers, cheese makers, and bakers in the region), always encouraging the exchange of ideas, rants, raves and time spent with interesting characters, Gerard created a place for the mad ones, “the ones who are mad to live, mad to talk, and mad to be saved”.Building Exchange Alley from scratch reignited in Gerard a love for the entire creative process, where he was developing a new space from beginning to end. His good taste and talent for visuals flourished, not only in the kitchen where his unparalleled skill building a menu was already proven, but also in matters of both interior and graphic design, where his extraordinary instincts soon had Exchange Alley on the list of Manhattan’s hotspots – not only for its food, but also for its unique environment and atmosphere. But he wasn’t ready to settle down yet, and in late 2013, he was approached to bring his skills and expertise to a wider audience, setting up his own consulting company, playing a central role in opening a number of the cities most exciting new restaurants. In tandem with this new venture he has also continued to write and develop a number of ideas for TV, radio and online projects, as well as currently hosting his popular weekly radio show “Eating Disorder”, an irreverent and often hilarious look at the culinary world, on Brooklyn’s celebrated Heritage Radio Network.Contact a speaker booking agent to check availability on Paul Gerard and other top speakers and celebrities.