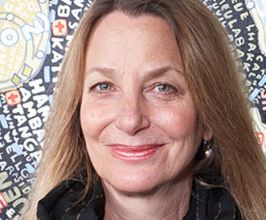 Book Paula Scher for your event

Paula Scher is one of the most influential graphic designers in the world. Described as the “master conjurer of the instantly familiar,” Scher straddles the line between pop culture and fine art in her work. Iconic, smart, and accessible, her images have entered into the American vernacular.Scher has been a partner in the New York office of Pentagram since 1991. She began her career as an art director in the 1970’s and early 80’s, when her eclectic approach to typography became highly influential. In the mid-1990’s her landmark identity for The Public Theater fused high and low into a wholly new symbology for cultural institutions, and her recent architectural collaborations have re-imagined the urban landscape as a dynamic environment of dimensional graphic design. Her graphic identities for Citibank and Tiffany & Co. have become case studies for the contemporary regeneration of American brands.Scher has developed identity and branding systems, promotional materials, environmental graphics, packaging and publication designs for a broad range of clients that includes, among others, Bloomberg, Microsoft, Bausch + Lomb, Coca-Cola, Shake Shack, Perry Ellis, the Museum of Modern Art, the Sundance Institute, the High Line, Jazz at Lincoln Center, the Metropolitan Opera, the New York City Ballet, the New York Philharmonic, the New Jersey Performing Arts Center, the New 42nd Street, the New York Botanical Garden, the United States Holocaust Memorial Museum, the Philadelphia Museum of Art, the Robin Hood Foundation, and the New York City Department of Parks and Recreation. In 1996 Scher’s widely imitated identity for The Public Theater won the coveted Beacon Award for integrated corporate design strategy. She has served on the board of directors of The Public Theater, and is a frequent design contributor to The New York Times, GQ and other publications. She served on the Public Design Commission of the City of New York from 2006 to 2015.During the course of her career Scher has been the recipient of hundreds of industry honors and awards. In 1998 she was named to the Art Directors Club Hall of Fame, and in 2000 she received the Chrysler Award for Innovation in Design. She has served on the national board of the American Institute of Graphic Arts (AIGA) and was president of its New York Chapter from 1998 to 2000. In 2001 she was awarded the profession’s highest honor, the AIGA Medal, in recognition of her distinguished achievements and contributions to the field, and in 2006 she was awarded the Type Directors Club Medal, the first woman to receive the prize. In 2012 she was honored with the Philadelphia Museum of Art’s Design Collab Award, in 2013 she received the National Design Award for Communication Design, presented by the Cooper-Hewitt, Smithsonian Design Museum, and in 2019 she was named a SEGD Fellow. Scher has been a member of the Alliance Graphique Internationale (AGI) since 1993 and served as its president from 2009 to 2012.Her work has been exhibited all over the world and is represented in the permanent collections of the Museum of Modern Art and the Cooper-Hewitt National Design Museum in New York, the Library of Congress in Washington, D.C., the Philadelphia Museum of Art, the Denver Art Museum, the Victoria and Albert Museum, London, the Museum für Gestaltung Zürich, and the Bibliothèque nationale de France and the Centre Georges Pompidou in Paris.Scher holds a BFA from the Tyler School of Art and honorary doctorates from the Corcoran College of Art and Design, the Maryland Institute College of Art, and Moore College of Art and Design. Her teaching career includes over two decades at the School of Visual Arts, along with positions at the Cooper Union, Yale University and the Tyler School of Art. She is the author of Make It Bigger (2002) and MAPS (2011), both published by Princeton Architectural Press, and the subject of Paula Scher: Works (2017), edited by Tony Brook and Adrian Shaughnessy and published by Unit Editions. Scher is featured in “Abstract: The Art of Design,” the Netflix documentary series about leading figures in design and architecture.Contact a speaker booking agent to check availability on Paula Scher and other top speakers and celebrities.