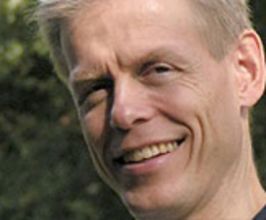 Book Peter Gloor for your event

Swiss-born Peter Gloor is a classic renaissance man. He has a Ph.D. in computer science. He’s an avid hiker. And he can play Chopin on the piano as skillfully as he can explain complex mathematical algorithms.He’s also written his fifth book, Swarm Creativity: Competitive Advantage Through Collaborative Innovation. “I’m always running the risk of trying to do too many things at once,” he says.In his book, Gloor draws upon his experience with more than 40 organizations during the past decade to share insights about Collaborative Innovation Networks (COINs) and swarm creativity.A COIN, according to Gloor, is a “cyberteam of self-motivated people with a collective vision, enabled by technology to collaborate in achieving an innovation by sharing ideas, information, and work.” The power that keeps the COIN engine running is what Gloor calls swarm creativity. “Swarm creativity is like a beehive or ant colony,” he says. “It may look chaotic from the outside, but everyone has a job, knows what to do, and does it.”Indeed, examples of COIN-based innovation abound in the age of the Web. Wikipedia, the online dictionary founded by Larry Sanger and Jimmy Wales in 2001, now has more than one million surprisingly accurate and complete entries, each completed by one of the more than 100,000 volunteer contributors to the site.Gloor sees an equally compelling case study in the rise of the open-source Linux operating system, now the most popular alternative to Microsoft’s Windows. “Open source software is developed faster, better, more securely, and at a lower cost than closed source software. Teams of open source software developers operate as near-ideal COINs, coordinating their creative efforts through swarm intelligence.”“The critical point here is that in social insect colonies, as in COINs, there is no individual giving marching orders. Neither the ant queen nor the lead developer of an open source team directs the individual behavior,” explains Gloor.Gloor contends that swarm creativity has clear advantages in accomplishing complex tasks: it affords flexibility, robustness, and self-repair. Errors and lack of centralized control are not only acceptable, but even welcome. It’s these very features of COINs that make revolutionary innovations possible, where no single human intellect could get the job done—projects like the World Wide Web.Gloor didn’t just invent the concept of swarm creativity; he experienced it himself as a postdoctoral researcher at the MIT Laboratory for Computer Science. “I was part of a small group of people that wanted to do something revolutionary for computer science education,” he recalls.His team’s goal was to develop an educational CD-ROM that would explain the highly complex subject of computer algorithms—one of the hardest parts of computer science—in a more interactive and visual way.Contact a speaker booking agent to check availability on Peter Gloor and other top speakers and celebrities.