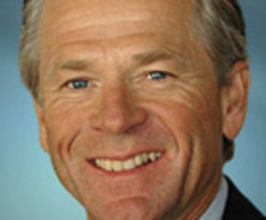 Business Professor at the University of California-Irvine

Book Peter Navarro for your event

Peter Kent Navarro is an American economist who currently serves as the Assistant to the President, Director of Trade and Industrial Policy, Director of the White House National Trade Council, a newly created entity in the executive branch of the U.S. federal government, which was then folded into the Office of Trade and Manufacturing Policy, a new role established by executive order on April 29, 2017.A professor emeritus of economics and public policy at the Paul Merage School of Business, University of California, Irvine, Navarro is the author or co-author of over a dozen books, including Death by China. He has published peer-reviewed economics research on energy policy, charity, deregulation and the economics of trash collection. He is the author of the path-breaking management books The Well-Timed Strategy, and The Coming China Wars, and the bestselling investment book If It’s Raining in Brazil, Buy Starbucks. His book Always a Winner: Finding Your Competitive Advantage in an Up and Down Economy shows companies how to thrive in the face of economic turbulence. Peter’s unique and internationally recognized expertise lies in his big picture application of a highly sophisticated but easily accessible macroeconomic analysis of the international business environment and financial markets for investors and corporate executives.Navarro’s articles have appeared in a wide range of publications, from Business Week, Los Angeles Times, New York Times, and the Wall Street Journal to Harvard Business Review, the Sloan Management Review, and the Journal of Business. Professor Navarro is a widely-sought after and gifted public speaker. He has appeared frequently on Bloomberg TV and radio, CNN, CNBC, and NPR.After working for a year in Washington, D.C. as an energy and environmental policy analyst, Peter Navarro received a Master’s in Public Administration from the John F. Kennedy School at Harvard University in 1979 and completed his Ph.D. in economics from Harvard in 1986. Graduated from Tufts University in 1972 with a B.A., Peter served in the Peace Corps in Southeast Asia from 1973 to 1976.Contact a speaker booking agent to check availability on Peter Navarro and other top speakers and celebrities.