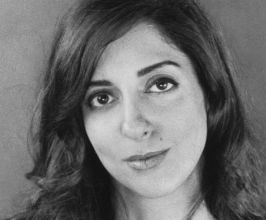 Author of “The Last Illusion”

Book Porochista Khakpour for your event

Porochista Khakpour was born in Tehran in 1978 and raised in the Greater Los Angeles area.She has been awarded fellowships from the Johns Hopkins University Writing Seminars, Northwestern University, the Sewanee Writers’ Conference, Virginia Center for the Creative Arts, The Ucross Foundation, Djerassi, and Yaddo. Her work has been nominated for a Pushcart Prize. She is most recently the recipient of a 2012 National Endowment for the Arts (NEA) Literature Fellowship in Creative Writing (Prose).Her debut novel “Sons and Other Flammable Objects” (Grove/Atlantic, 2007)–a New York Times “Editor’s Choice,” Chicago Tribune “Fall’s Best,” and 2007 California Book Award winner–is out in paperback. She has also penned the introduction to a new English edition of one of the greatest modern Iranian novels of all time, Sadegh Hedayat’s “The Blind Owl” (10/10).Her second novel, “The Last Illusion” (Bloomsbury, 2014) was a Kirkus Best Book of 2014, a Buzzfeed Best Fiction Book of 2014, an NPR Best Book of 2014, one of Buzzfeed’s 28 Best Books By Women in 2014, an Electric Literature Best Book of 2014, a Volume1 Brooklyn Favorite Book of 2014, a PopMatters Best Book of 2014, one of Refinery29’s 2015 Books to Read in 2015, and one of Largehearted Boy’s 11 Favorite Novels of 2014. It was also one of Flavorwire’s 15 “Most Anticipated Books of 2014”, io9.com’s “Mind-Blowing Science Fiction and Fantasy Books to Watch Out For in 2015”, The Millions “Most Anticipated” in their “The Great 2014 Book Preview“, Flavorwire’s “50 Excellent Fabulist Novels Everyone Should Read,”, and the Huffington Post’s “30 Books You NEED to Read in 2014.”In 2014, Khakpour was one of Dazed’s “Top 10 American Writers You Need to Read This Year,” one of Buzzfeed’s 32 Essential Asian-American Writers You Need to Be Reading, a Buzzfeed Community/OpenRoadMedia “10 Amazing Female Novelists Under 50,” and one of Entropy’s “2014 Literary Advocates.”She was also invited to be the guest-editor and curator of Guernica‘s first Iranian-American issue, which came out in November 2011.Her other writing (essays, features, reviews, cover stories, and columns) have appeared in or are forthcoming in Harper’s, The New York Times, The Los Angeles Times, The Wall Street Journal, The Daily Beast, The Village Voice, The Chicago Reader, Bookforum, Al Jazeera America, Vice, GQ, The Paris Review Daily, Elle, Spin, Slate, Salon, Poets and Writers, The Rumpus, Guernica, Departures, Paper, Flaunt, Nylon, Bidoun, Alef, Canteen, nerve.com, FiveChapters.com, Granta.com, Newyorker.com, and many other magazines and newspapers around the world. As of 2008, she’s been a frequent contributor of personal essays to the New York Times.She has given talks, lectures, and readings at festivals, universities, conventions, and conferences all over the country, from a keynote speech at the University of Cincinnati’s Rope Lecture Series to the PEN/Faulkner Reading Series. She has been on judging panels and committees for PEN, the Berlin Prize, Asian American Writers Workshop writing contests, the Rona Jaffe Foundation prizes, and many more.She has taught creative writing and literature at Columbia University, Johns Hopkins University, Wesleyan University, Sarah Lawrence College, Hofstra University, Fordham University, Bucknell University, Santa Fe University of Art and Design, Fairfield University’s MFA program, the University of Leipzig (where she was a Picador Guest Professor), the Bruce High Quality Foundation, and the Gotham Writers Workshop. Additionally, she has been guest faculty at Cleveland State University’s Imagination Conference, Taos Summer Writers’ Conference, Grub Street Muse & Marketplace Conference, and Kundiman’s Fiction Intensive.She is currently Writer in Residence at Bard College. She is also an Editor at Large at The Scofield and a Contributing Editor at The Offing, a new channel of the LA Review of Books.Her next project is a children’s book, coming out Fall 2015 on Civil Coping Mechanism’s new imprint WHITE RABBIT.In 2017, her first memoir “Sick” will be published by HarperPerennial: a memoir of chronic illness, misdiagnosis, addiction, and the myth of full recovery, chronicling the long, arduous discovery of her late-stage Lyme Disease.Contact a speaker booking agent to check availability on Porochista Khakpour and other top speakers and celebrities.