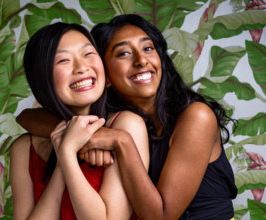 Book Priya Vulchi and Winona Guo for your event

Priya Vulchi and Winona Guo met in 2014, when they were sophomores at Princeton High School, just a few months after Eric Garner’s murder and the Ferguson protests. In New Jersey, financial literacy is a requirement but racial literacy—the ability to think, talk and act on race and racial injustice, on who we are, because race shapes every part of our lives —is disregarded. So, the two friends founded their non-profit CHOOSE to advocate for required racial literacy curricula in all K-12 schools in the United States. They developed a 224-page racial-literacy textbook, which was recognized and funded by Princeton University, featured in Teen Vogue, and used in classrooms in over 40 states.Winona and Priya then took a gap year before college (fundraising themselves through sponsorships from companies like Airbnb) and traveled alone to all 50 states to listen to over 500 strangers talk about race. Their most recent book, Tell Me Who You Are (Penguin Random House), features their takeaways and those stories and was called “at once hopeful, raw, and brimming with curiosity, engagement and youthful energy” by The New York Times best-selling author, Roxane Gay. Along the way, they were named two of Teen Vogue’s 21 under 21 Young People Changing the World and the youngest TED Residents ever, giving another TED Talk in addition to speaking at TEDWomen in 2017 (their talk, “What it takes to be racially literate,” has over 1 million views), United Nations’ Girl Up Conference, Gucci’s Chime for Change Conference, NEA’s Racial and Social Justice Conference, MSAN, SERC, MTI, Google, GoPro, and over a dozen schools nationwide. They just completed their junior years at Harvard and Princeton University and are committed to racial and intersectional equity as their lifelong work.All speaking fees go directly to funding their non-profit, CHOOSE.Contact a speaker booking agent to check availability on Priya Vulchi and Winona Guo and other top speakers and celebrities.