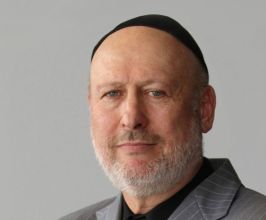 Daniel Lapin was born into a prestigious Torah family. He was a student of his father, Rabbi A.H. Lapin, who served the Jewish communities in Johannesburg and Cape Town, South Africa, eventually immigrating to America with his wife where they established the Am Echad synagogue in San Jose, CA. Like his father before him, Rabbi Lapin was privileged to learn with his great-uncle, the esteemed Rav Elya Lopian. In addition, he learned in yeshivas (Torah schools) in England and Israel as well as studying physics, engineering and mathematics in South Africa. After establishing a boat-building business in Johannesburg, Rabbi Daniel immigrated to the U.S. where, along with Michael Medved, he founded the Pacific Jewish Center in California, a groundbreaking initiative that introduced thousands of Jews to their religious heritage. In 1992, he and his family relocated to Washington State where he began his work strengthening the Judeo-Christian roots of this country by writing, speaking and standing shoulder to shoulder with prominent Christian leaders, leading to the establishment of the American Alliance of Jews and Christians.In 2002, Rabbi Lapin wrote his bestselling book “Thou Shall Prosper: The Ten Commandments for Making Money.” In 2007, Rabbi Lapin, along with his wife, Susan, founded Lifecodex Publishing. They began producing audio CDs and writing books to make ancient Jewish wisdom accessible to people of all faiths. Lifecodex Publishing now has DVDs as well as publishing works by other authors that promote traditional learning and values.Rabbi Lapin is a frequent speaker for hundreds of groups, institutions, organizations, and companies including Family Research Council, Legatus, Crystal Cathedral, Harvard Law School, Heritage Foundation, the United States Army, the Mont Pelerin Society of Economists, Prudential Insurance Company, the 1996 Republican National Convention, Voices United for Israel, Yeshiva University, and Young President’s Organization. Rabbi Lapin was the keynote speaker at the Congressional Bi-Partisan opening of the 106th Congress in Washington, DC. He speaks regularly at universities, businesses and synagogues and churches throughout the country. He regularly appears on both national and local radio and television shows.Rabbi Lapin is a noted writer. His articles have appeared in the Wall Street Journal, National Review, Commentary, The Jewish Press, The American Enterprise, The Washington Times, Crisis, and other publications. His first book, America’s Real War was a national bestseller and his second book, Buried Treasure: Secrets for Living from the Lord’s Language is highly popular for personal use and as a gift item. His third and fourth books, Thou Shall Prosper: The Ten Commandments for Making Money and Business Secrets from the Bible, published by John Wiley continue selling well around the world, including in Chinese and Korean translations. He also produces audio CDs that present thousands of years of Jewish wisdom emanating from the Bible, in ways that impact and improve modern day life.Contact a speaker booking agent to check availability on Rabbi Daniel Lapin and other top speakers and celebrities.