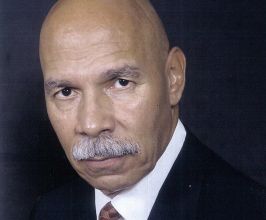 Book Randall Robinson for your event

Randall Robinson is an internationally respected social justice advocate and best-selling author. Until recently a professor of human rights law at Penn State University, Robinson in 1979 established TransAfrica, the mandate of which was to promote enlightened, progressive US policies towards Africa and the Caribbean. He created – and hosts – the human rights public television program “World On Trial”, during which international juries vote on world governments’ adherence to international human rights law. With reference to U.S. domestic policy, Robinson has been sounding the alarm regarding the proliferation of privately owned, money-making prisons and jails, and questions whether U.S. federal, state and local governments’ collaboration with these “businesses” constitutes a violation of international human rights law.As president of TransAfrica, Robinson frequently testified before Congress on U.S. policies toward Africa and the Caribbean. He led the Free South Africa Movement – a nationwide campaign to end apartheid in South Africa. His 1994 campaign to end military rule in Haiti included a 27-day hunger strike that led to the US-led multinational operation that returned to power Haiti’s first democratically elected – but violently overthrown – government. And he spearheaded a range of other campaigns to ensure more constructive US policies toward Africa and the Caribbean.Robinson believes that there is a connection between the dehumanizing portrayal of blacks in the media and the ease with which police shoot unarmed blacks. He classifies the widespread imprisonment of non- violent minorities as a threat to America’s socio-economic stability. And he urges Americans to demand that any person seeking their support for any elected office first declare their position on the ethically corrosive phenomenon of prisons being run as privately owned, money-making enterprises in America.Robinson’s non-fiction works include Defending the Spirit; The Debt – What America Owes to Blacks; The Reckoning – What Blacks Owe to Each Other; Quitting America – The Departure of a Black Man from his Native Land; Unbroken Agony – Haiti: From Revolution to the Kidnapping of a President. He is also the author of the novel MAKEDA.He is a graduate of Virginia Union University and Harvard Law School, and some nineteen universities have conferred upon him honorary Ph.D’s in recognition of his work in the area of social justice advocacy. Among the other institutions that have honored him are the United Nations, the Congressional Black Caucus, Harvard University, Essence, ABC News (Person of the Week), The Martin Luther King Center for Non-Violent Change, the NAACP, and Ebony, to mention a few. The Government of South Africa has conferred upon him the highest honor permissible to a non-citizen of South Africa, in recognition of his efforts to end apartheid. And the Eleanor Roosevelt Center at Val-Kill, New York, named him a 2017 medalist in honor of his work in the area of human rights.Robinson has presented his views and policy recommendations on such networks and shows as Nightline, CNN, CBS Evening News, CBS Sunday Morning, Face the Nation, Democracy Now, NPR, NBC Nightly News, ABC’s World News Tonight, The Today Show, C-Span, The Tavis Smiley Show, The Charlie Rose Show, and other leading American television programs. Robinson is available in partnership with Collective Speakers.Contact a speaker booking agent to check availability on Randall Robinson and other top speakers and celebrities.