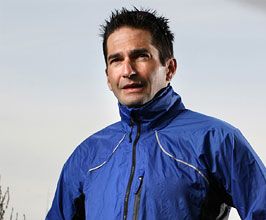 Ultra-marathon Runner and Adventurer; Host, “The Project”; Author of “Running for My Life”

Book Ray Zahab for your event

Challenge. Distance. DiscoveryOn November 1, 2006, former “pack a day smoker” Ray Zahab and two friends, Charlie Engle and Kevin Lin, both accomplished runners, set out on an expedition to cross the Sahara Desert by foot. 111 days and 7,500 kms after leaving the coast of Senegal, Africa they completed their journey by stepping into the Red Sea.This epic expedition had the trio running an average of 70kms a day without a single day of rest. National Geographic tracked the expedition by web, as well as the documentary film ‘Running The Sahara’, produced by Matt Damon and directed by Academy Award winner James Moll, was created in an effort to raise awareness for the drinking water crisis in North Africa. After witnessing and experiencing this water crisis in North Africa, Ray decided to leverage his future adventures to help raise awareness and funding for causes, like this one, that he supports and believes in.In 2007, Ray ran the three coastal trails of Canada back to back and virtually non-stop, for a total distance of 400 kms. The Akshayuk Pass on Baffin Island, East Coast Trail Newfoundland and West Coast Trail in British Columbia.Motivated by the Sahara run – Ray conceptualized the Canada ONExONE Run in May 2008. Along with a team of runners, Ray ran an average 80 kms per day in each of Canada’s 13 Provinces and Territories in 13 days. School visits were arranged along the way, students participated and communities became engaged in many of the issues which ONExONE endeavors to address to help improve the wellbeing of the world’s children. In Saskatoon alone, several thousand students and 27 schools were involved in school rallies and a city wide relay with Ray and the team.In 2008, Ray founded impossible2Possible (i2P) an organization that aims to inspire and educate youth through adventure learning, inclusion and participation in expeditions. Youth Ambassadors are selected from around the globe then participate, at no cost, in all aspects of the expedition, from logistics and running to creating educational content and team support. All of the i2P Youth Expeditions have included various challenge based initiatives through an Experiential Learning program, in which thousands of students participate as active ‘team members’ during the expeditions, from classrooms all over the world. This program and its technology is also provided at no cost to the students or schools participating. Since its inception, i2P Youth Expeditions have included 7 grueling expeditions; Baffin Island, Tunisia, the Amazon, Bolivia, India, Botswana, and Utah. The programs and expeditions are 100% free of cost.In 2009, Ray and two other Canadians, Kevin Vallely and Richard Weber, broke the world speed record for an unsupported expedition by a team to the South Pole. In the process, Ray trekked this traditional route from Hercules Inlet to the South Pole, a distance of 1,100 kms, solely on foot and snowshoes, without the use of skis. Students from all over North America joined the team on a daily basis, a program provided through impossible2Possible, as the trio continued their southern trek. The students received daily communications and actively took part in every step of the trek. Essentially becoming “teammates” of the expedition, and teammates of the Guinness World Record.In winter 2010, Ray and Kevin Vallely ran the length of frozen Lake Baikal in Siberia, 650 kms, over the course of 13 days, totally unsupported. Once again communication with satellite video conferencing to schools brought the expedition into classrooms, and classrooms onto the expedition.In early 2011, Ray ran the length of the “driest desert on Earth”, the Atacama Desert in northern Chile. Here he ran 1,200 kms in 20 days with minimal daily re-supply and with his camping gear on his back. Thousands of students joined this journey, again under his i2P organization, via live web and video conferencing.In summer 2011, Ray and Will Laughlin ran from the north park boundary to the south park boundary of Death Valley National Park, totally off-road. The 237 km run saw temps reaching over 120 degrees F.Beginning June 23rd 2013, Ray ran over 2,000km across Mongolia and the Gobi Desert. He was accompanied by both a film crew and photographer who recorded not only the expedition, but also created an robust film archive sharing the stories of the people and culture of Mongolia. This marks the beginning of the “To The Edge” series chronicling the stories and people and that Ray comes into to contact with on expeditions…situations and people that occur when at the edges of the Earth!Ray has also found the time to write 2 successful books about his life and adventures. Running for My Life published in 2007 and Ray’s second book, geared at youth readers, Running to Extremes, which recently became a National Best-Seller in Canada.In addition to being an adventurer, youth advocate and runner, Ray speaks around the world at events such as TED, IOC World Conference, Idea City, The Economist World in 2010 and 2011, World Affairs Council, and numerous Apple Distinguished Educator events internationally. He has been interviewed and appeared on several talk and news programs including CNNi, The Hour, CBC, CTV, BBC, Jay Leno, and Discovery.Outside of his own organization Ray further dedicates potions of his time as a proud member of the board of Directors of the Ryan’s Well Foundation, he is an Athletic Ambassador/board member of the ONExONE.org, and is a representative of SpreadTheNet. Ray was the recipient of the ONExONE Difference Award in 2007, and the Torchbearers Award in 2010. He is a Fellow of the Royal Geographical Society and Canadian Geographical Society. In spring 2012, Ray was invited by H.E. Tsogtbaatar Damdin (Minister of Environment, Mongolia) to join their Internal Advisory Committee..He continues today with life as an adventurer and as a volunteer with impossible2Possible. ‘Running The Sahara’ would begin a lifelong journey of discovery. A journey of learning that some of the largest barriers to success are the ones we put upon ourselves. By breaking these down, Ray has learned that we are all capable of achieving truly extraordinary things.Contact a speaker booking agent to check availability on Ray Zahab and other top speakers and celebrities.