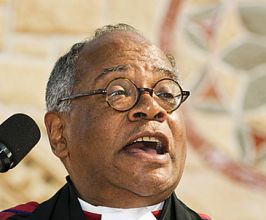 Harvard sociologist, author; Chairman of the Board of the John D and Catherine T MacArthur Foundation

Born in Boston, Massachusetts, in 1942, The Reverend Professor Peter J. Gomes is an American Baptist minister ordained to the Christian Ministry by The First Baptist Church of Plymouth, Massachusetts. Since 1970 he has served in The Memorial Church, Harvard University, and since 1974, he has been the Plummer Professor of Christian Morals and Pusey Minister in The Memorial Church.A member of the Faculty of Arts and Sciences and of the Faculty of Divinity of Harvard University, Professor Gomes holds degrees from Bates College (AB, 1965), and from the Harvard Divinity School (STB, 1968), and 27 honorary degrees. In 2001, Harvard University presented him with The Phi Beta Kappa Teaching Award. He is an Honorary Fellow of Emmanuel College and The University of Cambridge, England, where The Gomes Lectureship is established in his name.Widely regarded as one of America’s most distinguished preachers, The Reverend Professor Gomes has fulfilled preaching and lecturing engagements throughout this country and the British Isles. In 2004 he addressed the John F. Kennedy School of Government Leadership Conference. In 2003 he was Lecturer at Union Theological Seminary and Presbyterian School of Christian Education in Richmond, Virginia, and delivered The Lyttelton Addresses at Eton College, England. In 2002 he served as Hein Fry Lecturer for the Evangelical Lutheran Seminaries in the United States. In 2001 he was Missioner to Oxford University, preaching in the University Church of St. Mary the Virgin; in 2000 he delivered The University Sermon before The University of Cambridge, England, and preached The Millennial Sermon in Canterbury Cathedral, England; and in 1998 he presented The Lyman Beecher Lectures on Preaching, in Yale Divinity School.Named Clergy of the Year in 1998 by Religion in American Life, The Reverend Professor Gomes participated in the presidential inaugurations of Ronald Wilson Reagan and of George Herbert Walker Bush. His New York Times and national best-selling books, The Good Book: Reading the Bible with Mind and Heart and Sermons: Biblical Wisdom for Daily Living, were published by William Morrow and Company, Inc. The Good Life: Truths That Last in Times of Need was published in 2002 by HarperSanFrancisco, which published Strength for the Journey: Biblical Wisdom for Daily Living in spring 2003. In 2003, Gomes’s Book of Good Graces: A Collection of Graces and Blessings, was published by Thornwillow Press, Ltd. In 2005, The Backward Glance and the Forward Look was published by WordTech. He has also published ten volumes of sermons as well as numerous articles and papers.The Reverend Professor Gomes serves on the advisory board of The Living Pulpit. In addition, he serves as Harvard University trustee of The Museum of Fine Arts, Boston, and as trustee of The Roxbury Latin School and of Bates College. He is a member of The Massachusetts Historical Society, The Colonial Society of Massachusetts, and a sometime Fellow of The Royal Society of Arts, London, England. Former acting director of The W.E.B. Du Bois Institute for Afro-American Research, Harvard University, he is past president of The Signet Society, Harvard’s oldest literary society, and former trustee of Wellesley College, of The Public Broadcasting Service, and of Plimoth Plantation. He is past president and trustee of The Pilgrim Society of Plymouth, Massachusetts.Profiled by Robert Boynton in The New Yorker, and interviewed by Morley Safer on 60 Minutes, The Reverend Professor Gomes was included in the summer 1999 premiere issue of Talk magazine as part of its feature article, ‘The Best Talkers in America: Fifty Big Mouths We Hope Will Never Shut Up.’Contact a speaker booking agent to check availability on Rev. Peter Gomes and other top speakers and celebrities.