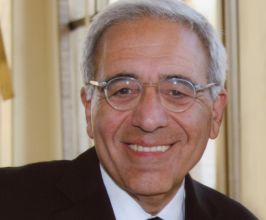 Book Reynold Levy for your event

Reynold Levy has most recently served as the president of the Robin Hood Foundation, an innovative philanthropic organization founded in 1988 to alleviate poverty in New York City. During his tenure, Levy devised an ambitious project designed to bridge the gap between the over 800,000 poor New Yorkers eligible for four critical income maintenance programs and those enrolled in them. Called the Start by Asking campaign, it combines big data analytics, behavioral economics, community organization, a wide range of corporate, civic and union partnerships and strong coordination with government, all aimed at improving the standard of living for tens of thousands of disadvantaged in the five boroughs of America’s largest city.Currently, Reynold serves as a consultant to commercial and nonprofit institutions and to benefactors seeking to expand their philanthropy. He is also the lead director of First Republic Bank.His fourth book, They Told Me Not To Take That Job: Tumult, Betrayal, Heroics and the Transformation of Lincoln Center, a New York Times best seller, is available wherever books and e-books are sold. Levy now serves on the board of the Charles H. Revson Foundation, the board of overseers of the International Rescue Committee, a member of the Council on Foreign Relations, a trustee of the American Ballet Theatre and a Fellow in the American Academy of Arts and Sciences. In 2014, he was elected to serve a three-year term as a member of the Tony Awards Nominating Committee.Levy completed a thirteen-year tenure as the President of Lincoln Center for the Performing Arts in January, 2014. His leadership at Lincoln Center continued a distinguished career of public service. He has been President of the International Rescue Committee, the senior officer of AT&T in charge of government relations, President of the AT&T Foundation, Executive Director of the 92nd Street Y, and Staff Director of the Task Force on the New York City Fiscal Crisis.During his tenure at Lincoln Center, award winning and critically acclaimed programs flourished. Simultaneously, an unprecedented and much applauded $1.2 billion physical transformation occurred. It modernized and expanded the 16-acre campus, housing eleven world class performing arts organizations and educational institutions. The multifaceted, comprehensive Lincoln Center redevelopment embraced public spaces, plant infrastructure, and new, renovated, and expanded artistic facilities.Reynold Levy is a graduate of Hobart College. He was granted a Master’s Degree and PhD in Government and Foreign Affairs from the University of Virginia and a law degree from Columbia University, the latter two in 1973.Levy’s alma mater, Hobart College, honored him with its Alumni Medal of Excellence, given to only twenty graduates in the 125 year history of the school. The International Rescue Committee bestowed on him its coveted Freedom Award. Columbia University awarded Levy the highly regarded Lawrence A. Wien Prize for Social Responsibility. Lincoln Center granted him its Laureate Award. Levy has received the 2009 Design Patron Award granted by the Smithsonian’s Cooper-Hewitt Museum for his stewardship of Lincoln Center’s massive physical transformation. In recognition of Lincoln Center’s successful modernization and rejuvenation, the Board of Directors decided to name a sculpturally expressive bridge designed by Diller Scofidio + Renfro as “The President’s Bridge: In Honor of Reynold Levy, October 1, 2012.”Levy has authored three other books, Nearing the Crossroads: Contending Approaches to American Foreign Policy (1975, Free Press of MacMillan), Give and Take: A Candid Account of Corporate Philanthropy (1999, Harvard Business School Press) and Yours for the Asking: An Indispensable Guide To Fundraising and Management (2008, John Wiley and Sons). He has written extensively and spoken widely about philanthropy, the performing arts, humanitarian causes and issues, and the leadership and management of nonprofit institutions. Levy has also served as a consultant to many nonprofit institutions and as a Senior Advisor with the private equity firm, General Atlantic.Levy has held the post of Senior Lecturer at The Harvard Business School and has taught law, political science, and nonprofit management at Columbia and New York Universities and at The City University of New York. He has received honorary degrees from Dickinson College, Macaulay Honors College of The City University of New York, Fordham University and Hobart College.Levy has served on the Boards of more than a dozen nonprofit organizations including The Independent Sector, The Peterson Institute for International Economics, the Manhattan Theatre Club, and the Nathan Cummings Foundation.His newest book, Start Now: Because That Meaningful Job Is Out There, Just Waiting for You is due to be published under the imprint of RosettaBooks in the first quarter of 2020.Contact a speaker booking agent to check availability on Reynold Levy and other top speakers and celebrities.