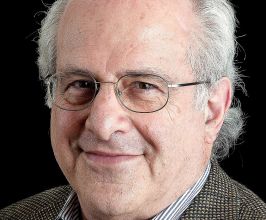 Author, Economist & Professor of Economics Emeritus at the University of Massachusetts, Amherst

Richard D. Wolff is Professor of Economics Emeritus, University of Massachusetts, Amherst where he taught economics from 1973 to 2008. He is currently a Visiting Professor in the Graduate Program in International Affairs of the New School University, New York City.Earlier he taught economics at Yale University (1967-1969) and at the City College of the City University of New York (1969-1973). In 1994, he was a Visiting Professor of Economics at the University of Paris (France), I (Sorbonne). Wolff was also regular lecturer at the Brecht Forum in New York City.Over the last twenty five years, in collaboration with his colleague, Stephen Resnick, he has developed a new approach to political economy. While it retains and systematically elaborates the Marxist notion of class as surplus labor, it rejects the economic determinism typical of most schools of economics and usually associated with Marxism as well. Professor Wolff was also among the founders in 1988 of the new academic association, Association of Economic and Social Analysis (AESA), and its quarterly journal Rethinking Marxism.Since 2005, Professor Wolff has written many shorter analytical pieces focused chiefly, although not only, on the emerging and then exploding global capitalist crisis. He regularly published such shorter analytical pieces on the website of the Monthly Review magazine and occasionally in many other publications, both print and electronic. The wide circulation of the shorter pieces coupled with the deepening crisis brought many invitations to present work in public forums.Professor Wolff has given many public lectures at colleges and universities (Notre Dame, University of Missouri, Washington College, Franklin and Marshall College, New York University, etc.) to community and trade union meetings, in high schools, etc. He also maintains an extensive schedule of media interviews (on many independent radio stations such as KPFA in Berkeley, KPFK in Los Angeles, WBAI in New York, National Public Radio stations, the Real News Network, the Thom Hartmann show, and so on). He has spoken at Occupations and local high schools, churches, and monthly at the Brecht Forum in New York.Professor Wolff’s weekly show, “Economic Update with Richard D. Wolff,” is syndicated on over 70 radio stations nationwide and available for broadcast on Free Speech TV.Professor Wolff enjoys french cuisine and lives in New York City with his wife, Dr. Harriet Fraad. They have two adult children.Contact a speaker booking agent to check availability on Richard D. Wolff and other top speakers and celebrities.