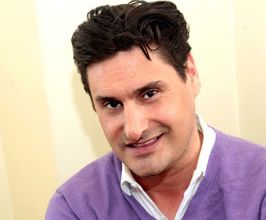 Editor-in-Chief of NaughtyGossip.com & Host of the “Straight Shuter” Podcast; Former Host of VH1’s “The Gossip Table”

Book Rob Shuter for your event

Naughty But Nice Rob is a gossip columnist, magazine editor, talk-show host and author.Shuter is the Founder & Editor in Cheif of NaughtyGossip.com – a cheeky site that breaks and covers celebrity news with a pinch and never a punch! His Podcast “Straight Shuter” brings to life his number one celebrity gossip column on radaronline.com.Born a British citizen, Shuter immigrated to the United States. At the age of 20, he got his first job in America as a summer intern in the largest Broadway press office, Boneau/Bryan-Brown. Returning to the United Kingdom to receive his Master’s degree in political science from the University of Edinburgh in Scotland, he moved full-time to New York after graduating. Starting as a receptionist for the public relations company Bragman, Nyman Cafarelli, eventually he was running the entertainment division at Dan Klores Communications representing Bon Jovi, Alicia Keys, Jessica Simpson, Naomi Campbell, Diddy, Esquire Magazine, Kate Spade, Estee Lauder and many of entertainment’s biggest events.In 2007, he left the world of public relations to become executive editor of the struggling American edition of OK! Magazine. As an editor, OK! became the fastest growing magazine in the USA, sold its first 1,000,000 issue, and resisted competition, including People magazine, delivering exclusive images of Matthew McConaughey, Jessica Alba, Sheryl Crow, Anna Nicole and Jamie Lynn Spears baby. OK! also during that time got the first exclusive interview with Britney Spears post breakdown.In 2009, Shuter left OK! to become AOL PopEater’s first ever gossip columnist, debuting his Naughty But Nice column on one of the most visited online entertainment sites. In June 2013 Shuter became a cohost on the VH1 daily morning entertainment news and gossip series, “The Gossip Table.”Contact a speaker booking agent to check availability on Rob Shuter and other top speakers and celebrities.