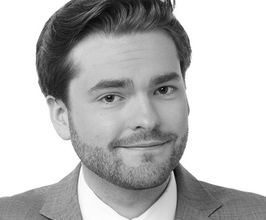 Senior Writer at Fortune & Co-Chair of the Brainstorm Finance Conference

Book Robert Hackett for your event

Robert Hackett is a Senior Writer at Fortune, a founding co-chair of the Brainstorm Finance conference in Montauk, N.Y., and a creator of The Ledger, Fortune’s franchise covering the intersection of finance and tech. He writes a weekly edition of Fortune’s tech newsletter (formerly Cyber Saturday), co-manages the Fortune 40 Under 40 list, and co-hosts video series, including Tech Debate and Balancing The Ledger.Robert was named a finalist for the 2018 Larry Birger Young Business Journalist Award. He received honors in the “technology” category at the 2017 SABEW Best in Business Awards. He also worked as a research assistant on Fortune’s 2016 Gerald Loeb Award-nominated investigation into North Korea’s cyberattack on Sony Pictures.Robert has penned cover stories on Bitcoin, blockchains, and hacking. He has written features on diverse subjects, including the rollout of China’s ambitious digital currency plans, the unraveling of Facebook’s Libra crypto-dream, and the demise of Google-sibling Sidewalk Labs’ city-of-the-future in Toronto. He has profiled companies, like the tech transformation of industrial giant Honeywell, and people, like Ethereum creator Vitalik Buterin. He wrote the foreword to the 2018 Time book, Cybersecurity, Hacking, the Dark Web and You.Robert has moderated sessions at Brainstorm Tech in Aspen, SXSW in Austin, Web Summit in Lisbon, Money2020 and the Consumer Electronics Show in Las Vegas, Digital Life Design Conference in Munich, RSA Conference in San Francisco, Consensus in New York. He has appeared as a guest on WNYC’s Brian Lehrer Show, Fox 5 NY, Chicago’s WGN Radio, Cheddar, and elsewhere.Prior to joining Fortune in 2014, Robert worked at Nautilus magazine, TED Conferences, and Johnson & Johnson. He studied chemistry & chemical biology and English with minors in science & technology studies and history at Cornell University. He earned a master’s degree from Columbia Journalism School.He plays bass and lives in New York.Contact a speaker booking agent to check availability on Robert Hackett and other top speakers and celebrities.