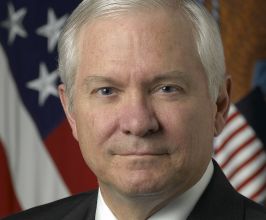 Robert Gates served as the 22nd secretary of defense (2006-2011) and is the only Secretary of Defense in U.S. history to be asked to remain in that office by a newly elected President. President Barack Obama is the eighth president Gates has served. He previously served under President George W. Bush.On Gates’ last day in office, President Barack Obama awarded him the Presidential Medal of Freedom, America’s highest civilian honor.Before becoming secretary of defense in 2006, Gates was the president of Texas A&M University, the nation’s seventh largest university. Prior to assuming the Texas A&M presidency on August 1, 2002, he served as interim dean of the George Bush School of Government and Public Service at Texas A&M from 1999 to 2001.Gates joined the Central Intelligence Agency in 1966 and spent nearly 27 years as an intelligence professional. During that period, he spent nearly nine years at the National Security Council, the White House, serving four presidents of both political parties.Gates served as director of Central Intelligence from 1991 until 1993. He is the only career officer in CIA’s history to rise from entry-level employee to director. He served as deputy director of Central Intelligence from 1986 until 1989 and as assistant to the President and deputy national security adviser at the White House from January 20, 1989 until November 6, 1991, for President George H.W. Bush.Gates has been awarded the National Security Medal, the Presidential Citizens Medal, has three times received the National Intelligence Distinguished Service Medal, and has three times received CIA’s highest award, the Distinguished Intelligence Medal.He is the author of the memoir, From the Shadows: The Ultimate Insider’s Story of Five Presidents and How They Won the Cold War, published in 1996.Until becoming secretary of defense, Gates served as chairman of the independent trustees of The Fidelity Funds, the nation’s largest mutual fund company, and on the board of directors of NACCO Industries, Inc., Brinker International, Inc. and Parker Drilling Company.Gates currently serves on the board of directors of Starbucks and is partner in the consulting firm, RHG LLP, with former Secretary of State Condoleezza Rice and others. He has also served on the board of directors and executive committee of the American Council on Education, the board of directors of the National Association of State Universities and Land-Grant Colleges and the national executive board of the Boy Scouts of America. He has also been president of the National Eagle Scout Association.A native of Kansas, Gates received his bachelor’s degree from the College of William & Mary, his master’s degree in history from Indiana University and his doctorate in Russian and Soviet history from Georgetown University. Gates was installed as chancellor of the college of William & Mary, beginning in February 2012. He is the first William & Mary alumnus in the modern era to serve as chancellor of the college.In 1967, he was commissioned a second lieutenant in the U.S. Air Force and served as an intelligence officer at Whiteman Air Force Base in Missouri.Contact a speaker booking agent to check availability on Robert M. Gates and other top speakers and celebrities.