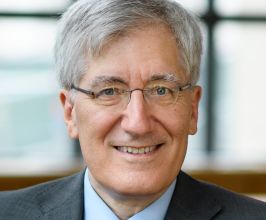 Founding Director of the James Madison Program in American Ideals and Institutions; Professor at Princeton University

Robert P. George is McCormick Professor of Jurisprudence and Director of the James Madison Program in American Ideals and Institutions at Princeton University. He is also frequently a Visiting Professor at Harvard Law School where he teaches philosophy of law and related subjects.In addition to his academic service, Professor George has served as Chairman of the U.S. Commission on International Religious Freedom. He has also served on the President’s Council on Bioethics, as a presidential appointee to the United States Commission on Civil Rights, and as the U.S. member of UNESCO’s World Commission on the Ethics of Science and Technology.He is a former Judicial Fellow at the Supreme Court of the United States, where he received the Justice Tom C. Clark Award. He serves on the boards of the John M. Templeton Foundation Religion Trust, the Lynde and Harry Bradley Foundation, the Ethics and Public Policy Center, the Becket Fund for Religious Liberty, the National Center on Sexual Exploitation, and the Center for Individual Rights, among others.Professor George is author of Making Men Moral: Civil Liberties and Public Morality (Oxford University Press, 1993), In Defense of Natural Law (Oxford University Press, 1999), The Clash of Orthodoxies (ISI, 2001) and Conscience and Its Enemies (ISI, 2013). He is co-author of Conjugal Union: What Marriage Is (Cambridge University Press, 2014), Embryo: A Defense of Human Life (2nd edition, Doubleday, 2011), Body-Self Dualism in Contemporary Ethics and Politics (Cambridge University Press, 2008), and What is Marriage? (Encounter, 2012). He is editor of several volumes, including Natural Law Theory: Contemporary Essays (Oxford University Press, 1992), The Autonomy of Law: Essays on Legal Positivism (Oxford University Press, 1996), Natural Law, Liberalism, and Morality (Oxford University Press, 1996), and Great Cases in Constitutional Law (Princeton University Press, 2000), and co-editor of the Cambridge Companion to Natural Law (Cambridge University Press, 2017).Professor George’s articles and review essays have appeared in the Harvard Law Review, the Yale Law Journal, the Columbia Law Review, the University of Chicago Law Review, the Review of Politics, the Review of Metaphysics, the American Journal of Jurisprudence, and Law and Philosophy. He has also written for the New York Times, the Wall Street Journal, the Washington Post, First Things, the Boston Review, and the Times Literary Supplement.A graduate of Swarthmore College, Professor George holds M.T.S. and J.D. degrees from Harvard University and the degrees of D.Phil., B.C.L., D.C.L., and D.Litt. from Oxford University. He was elected to Phi Beta Kappa at Swarthmore and received a Frank Knox Fellowship from Harvard for graduate study in law and philosophy at Oxford. He holds twenty-one honorary degrees, including doctorates of law, letters, ethics, science, divinity, humane letters, civil law, law and moral values, humanities, and juridical science.He is a recipient of the United States Presidential Citizens Medal, the Honorific Medal for the Defense of Human Rights of the Republic of Poland, the Bradley Prize for Intellectual and Civic Achievement, the Philip Merrill Award of the American Council of Trustees and Alumni, the Paul Bator Award of the Federalist Society for Law and Public Policy, the Sidney Hook Award of the National Association of Scholars, a Silver Gavel Award of the American Bar Association, the Charles Fried Award of the Harvard Law School Federalist Society, the Irving Kristol Award of the American Enterprise Institute, the James Q. Wilson Award of the Association for the Study of Free Institutions, and Princeton University’s President’s Award for Distinguished Teaching. Together with his friend and teaching partner Cornel West, he received the inaugural Leadership Award of Heterodox Academy.He has given the John Dewey Lecture in Philosophy of Law at Harvard, the Guido Calabresi Lecture in Law and Religion at Yale, the Elizabeth Anscombe Memorial Lecture in Bioethics at Oxford, the Sir Malcolm Knox Lecture in Philosophy at the University of St. Andrews in Scotland, and the Frank Irvine Lecture in Law at Cornell.Professor George is general editor of New Forum Books, a Princeton University Press series of interdisciplinary works in law, culture, and politics. He is a member of the Council on Foreign Relations and is Of Counsel to the law firm of Robinson & McElwee.Contact a speaker booking agent to check availability on Robert P. George and other top speakers and celebrities.