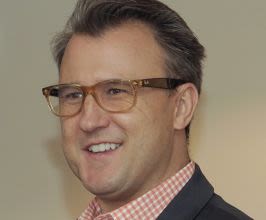 Book Roman Bodnarchuk for your event

Roman is a digital marketing pioneer and a world-renowned authority on digital business strategies. He has shared his insight, stories and successes to the delight of thousands of business leaders across the globe on topics, including Innovation, Trends, Sales, Marketing, Social Media and now Artificial Intelligence.Over the past 20 years, Roman has had the foresight to identify digital trends and quickly leverage them into successful business solutions that have greatly benefited clients from start-ups to global brands to the tune of billions.Speaking of tunes, in the mid-90s, he was the one-man marketing machine that launched two unknown bands – The Backstreet Boys and NSYNC – at a time when the Internet was just emerging. The chart-topping result helped both bands achieve $1 billion in sales in just 27 months.And Roman was no one-hit wonder! He then founded his first company, N5R.com in 1998 with the launch of the first online promotion in Canada for leading condominium developer Tridel Corporation. Giving away a free condo in downtown Toronto as its grand prize, the contest created a national media frenzy that generated a massive database; establishing Roman as digital marketing leader; and N5R.com as leading digital marketing agency.For the next five years, Roman spearheaded online strategies and marketing campaigns for 21 of the world’s top 50 brands, including Apple, Microsoft, P&G, Crest, Johnson & Johnson, Sunoco and Hershey’s.N5R.com’s biggest success came from focusing efforts on the real estate sector where Roman identified how to leverage online marketing to generate leads, and convert them into sales. The move to real estate produced real results for developers like Trump, Tridel, Related Group, Ritz Carlton, PlazaCorp, Four Seasons, Hyatt, Hilton and Intrawest – 22 years, 150 projects, 15 countries, 30 cities — $5 billion in sales!As N5R.com solidified its position as the world’s leading real estate project sales and marketing firm, Roman hit the road as a keynote speaker on real estate appearing at high profile events such as The Property Show and the IMN Real Estate Private Equity Forum.Roman recognized an opportunity to capitalize on N5R.com’s success and the burgeoning Canadian condominium market – and he looked beyond the web to make it happen. In 2010, Roman produced a national weekly television program called the Condo Show. Over the next five years, the Condo Show aired 40 episodes featuring the hottest properties and developers, and connecting them with buyers worldwide. http://www.condoshow.com.This success inspired Roman to author two books – The Million Dollar Minute: The secrets of how we sold 367 condos in 90 minutes, and how you can too! in 2014, and It’s Not The Market, It’s Your Marketing – Tips and Strategies To Market and Sell Your Property in 2015.During this time, Roman is proudest of Condo Mastery: The Extreme Condo Sales System, an innovative an online university he developed where he can educate sales and marketing professionals on a global scale through podcasts. Between 2014 and 2106, Roman produced 72 episodes covering an array of thought leading and practical topics affecting the real estate sector.Today, Roman is extremely excited about the evolution of N5R.com, and the launch of his latest venture, GlobalAI – the first Artificial Intelligence (AI) company 100% focused on automating and integrating AI to completely replace your sales and marketing functions.His reason for going all-in on Artificial Intelligence is he is convinced that it is the most important and most transformative technology ever to change business.Roman has been a leader and ‘succeeder’ in digital marketing trends, tools and techniques for over 20 years. Today he is the ‘Gary Vaynerchuk of Artificial Intelligence’ and he wants to share all his stories, successes and secrets with leaders wanting to the best for their business.Contact a speaker booking agent to check availability on Roman Bodnarchuk and other top speakers and celebrities.