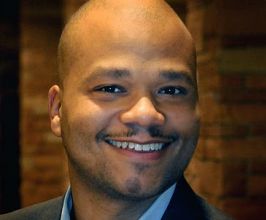 Book Ronald Lewis for your event

Constantly investigating innovative and new ideas, Ronald Lewis is out to change the world. Through his career as an independent journalist, Ronald has been able to establish and cultivate relationships with some of the biggest names in technology and the most talked about names in entrepreneurship. Currently, he is an advocate for several revolutionary technologies and serves as an activist against the unknown injustices which plague our culture. His life of research and interest in just programs lead to the publication of his first book, Stick it to The Man, released summer of 2009 through Skyhorse Publishing.Quick facts about RonaldOrganized major shareholder protest against XO Communications, representing thousands of shareholders owning 24 million sharesAuthor of Stick it to The Man, a book the Pittsburgh-Tribune calls a ‘survival guide for tough times’Developed first-known social network in 1999Featured or quoted by Businessweek, FastCompany, Denver Post, Detroit News, and elsewhereMore about RonaldRonald’s success hasn’t come easy. After many starts, failures, and restarts he has finally found his groove and established a wonderful life in Denver, Colorado. His life is proof that the only requirements for being successful is to never lose sight of your goals a message he hopes to inspire in others.Born in Detroit, Michigan to a very supportive mother and a very neglectful father Ronald did the only thing a child could do at that age: excel in school. His curiosity and appetite for information usually placed him at the top of his class. Ronald, with his infinite imagination, made his first computer out of construction paper. At the age of 10 Ronald’s neighborhood landscaping business served as his first start-up company and ignited his entrepreneurial spirit for life.Things only went up for Ronald from there. His industrious attitude and appetite for things that were new always lead him to the next step. At a young age he taught himself how to program computers using Microsoft QuickBasic and, later, Visual Basic.At the age of 15 Ronald attended an engineering conference where he first saw Bill Gates speak. Lewis later sent a letter to Gates, expressing his enthusiasm towards his technology and his team of engineers. Gates, impressed with how well informed a 15 year old could be, maintained correspondence with Lewis. Over the coming years, Ronald would test numerous software programs and would receive awards for this work including the Spirit of Detroit and Microsoft MVP.Over the next several years Ronald experienced highs and lows. At his worst, he was in debt, crashing with friends, and undergoing mental and emotional stress from the death of his father and the divorce from his wife. At his highest, he was on a South by Southwest panel about race and technology, hosting an online interview show featuring guests from Cisco, Carnegie Melon, and Southwest Airlines, and publishing a book about how to skirt our country’s major financial institutions.Currently, Ronald lives and works in Denver, where he continues to advocate new technologies such as Square, VoIP, and Cloud Computing. He is also an activist against big banks and has hosted several major speaking engagements. Currently, he believes in living a life without limits and proposes everyone do the same to recognize your own limitations, visible and otherwise, and to not let them keep you from achieving what you most want from life.Contact a speaker booking agent to check availability on Ronald Lewis and other top speakers and celebrities.