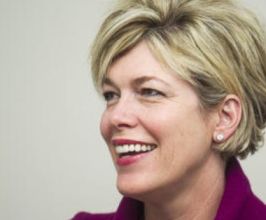 Book Sally Bradshaw for your event

Sally Bradshaw is a Republican political operative, originally hailing from Mississippi and currently residing in Florida. Bradshaw was a senior advisor to Jeb Bush and his 2016 presidential campaign.Bush called Bradshaw his “closest advisor for the entirety of my political career.” A lifelong Republican, Bradshaw announced that she left the party in 2016, citing her disapproval of presidential candidate Donald Trump.After initially attending Vanderbilt University for two years, Bradshaw graduated from George Washington University in 1987 with a B.A. in political science. She launched her political career by working for Mississippi Congressman Webb Franklin and then interning for Mississippi Governor Haley Barbour, who, at the time, was serving as director of political affairs for President Ronald Reagan. From there, she joined George H.W. Bush’s 1988 presidential campaign as a staff assistant and a regional field coordinator. It was during her time on his father’s campaign that she first met Jeb.After H.W. Bush won the presidency, Bradshaw worked on his transition team and then served as associate director of political affairs at the White House from 1989 through 1991. She subsequently left Washington and moved to Florida, where she worked as staff director for the House Republican Office in Tallahassee. In 1992, she once again found herself working for H.W. Bush, serving as the executive director of Bush’s Florida efforts during his unsuccessful re-election campaign.After the campaign, Bradshaw worked as the political director of the Republican Party of Florida. In 1994, she managed Jeb Bush’s first—and ultimately unsuccessful—bid for Governor of Florida, billing himself as a “head-banging conservative.” The duo tried again in 1998, with Bradshaw once again serving as campaign manager. This time, Bush won by a margin of 55 to 45 percent. Bradshaw helped with the transition and then became his chief of staff from 1999 through the end of 2000.In between elections, she served as the executive director of the Foundation for Florida’s Future, a “nonprofit grassroots public policy institute.” When Bush ran for re-election in 2002, Bradshaw was once again by his side, serving as the senior campaign advisor.The 2000s saw Bradshaw transitioning in and out of campaign and consulting work. She took a break from campaigns and worked as a consultant for two organizations, Design Farm and Core Message, from 2002 through 2004. In October 2006, Mitt Romney’s campaign announced Bradshaw would be serving as Romney’s senior advisor during his 2008 presidential bid. Then, during the 2010 general election, she served as senior advisor to Florida’s Republican party.She moved on in 2011 to serve as a general consultant for Haley PAC, Gov. Barbour’s political action committee, and then became a board member on the Florida State Board of Education. She resigned from this position two months before her term was scheduled to end, citing family obligations.In 2013, she was one of five members selected to serve on the Republican National Committee’s (RNC) Growth and Opportunity Project, which sought to “recommend a plan to further ensure Republicans are victorious in 2013, 2014, 2016 and beyond.” More recently, she worked as a transition director and senior advisor for former Florida Speaker of the House Will Weatherford.On August 1, 2016, CNN reported that Bradshaw had left the Republican Party to become independent. She cited her disapproval of the party’s presidential candidate Donald Trump as her reason for the split. In an email exchange with the network, Bradshaw said that the party was “at a crossroads and nominated a total narcissist — a misogynist — a bigot.” She went on to explain, “This is a time when country has to take priority over political parties. Donald Trump cannot be elected president.” Bradshaw indicated that, although she did not support Democratic candidate Hillary Clinton, she would vote for Clinton if the race were close in Florida.Contact a speaker booking agent to check availability on Sally Bradshaw and other top speakers and celebrities.