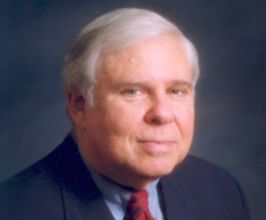 Book Sanford Levinson for your event

Sanford Levinson, who holds the W. St. John Garwood and W. St. John Garwood, Jr. Centennial Chair in Law, joined the University of Texas Law School in 1980. Previously a member of the Department of Politics at Princeton University, he is also a Professor in the Department of Government at the University of Texas. The author of over 350 articles and book reviews in professional and popular journals–and a regular contributor to the popular blog Balkinization–Levinson is also the author of four books: Constitutional Faith (1988, winner of the Scribes Award); Written in Stone: Public Monuments in Changing Societies (1998); Wrestling With Diversity (2003); and, most recently, Our Undemocratic Constitution: Where the Constitution Goes Wrong (and How We the People Can Correct It) (2006). Edited or co-edited books include a leading constitutional law casebook, Processes of Constitutional Decisionmaking (5th ed. 2006, with Paul Brest, Jack Balkin, Akhil Amar, and Reva Siegel); Reading Law and Literature: A Hermeneutic Reader (1988, with Steven Mallioux); Responding to Imperfection: The Theory and Practice of Constitutional Amendment (1995); Constitutional Stupidities, Constitutional Tragedies (1998, with William Eskridge); Legal Canons (2000, with Jack Balkin); The Louisiana Purchase and American Expansion (2005, with Batholomew Sparrow); and Torture: A Collection (2004, revised paperback edition, 2006), which includes reflections on the morality, law, and politics of torture from a variety of disciplinary perspectives. He received the Lifetime Achievement Award from the Law and Courts Section of the American Political Science Association in 2010.He has been a visiting faculty member of the Boston University, Georgetown, Harvard, New York University, and Yale law schools in the United States and has taught abroad in programs of law in London; Paris; Jerusalem; Auckland, New Zealand; and Melbourne, Australia. He was a Fellow at the Institute for Advanced Study in Princeton in 1985-86 and a Member of the Ethics in the Professions Program at Harvard in 1991-92. He is also affiliated with the Shalom Hartman Institute of Jewish Philosophy in Jerusalem. A member of the American Law Institute, Levinson was elected to the American Academy of Arts and Sciences in 2001. He is married to Cynthia Y. Levinson, a writer of children’s literature, and has two children, Meira, a member of the faculty at the Harvard Graduate School of Education (after teaching in the Atlanta and Boston public school systems), and Rachel, a lawyer with the American Association of University Professors in Washington, D.C.Contact a speaker booking agent to check availability on Sanford Levinson and other top speakers and celebrities.