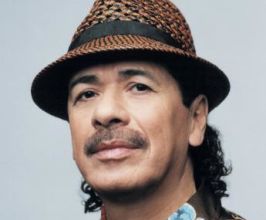 Book Santana for your event

Born in Autlan, Mexico, Carlos Santana was influenced by the traditional music of his native country from a very early age. His unique fusion of Latin music and rock’n’roll eventually led to fourteen gold and nine platinum albums. As a child, Santana’s father, an accomplished mariachi violinist, instructed him in music.In 1955, the family moved to the border town of Tijuana and Carlos took up the guitar. In 1961, Santana relocated to San Francisco to join his family who had gone ahead of him a year previously. There, Santana was immersed in an exciting climate of change – political, cultural, and artistic.1966 saw the debut performance of the Santana Blues Band and such was the speed of their rise that by 1969, the band was playing at the legendary Woodstock festival. In the same year, their first album was released, entitled ‘Santana’. It went double platinum, but was exceeded by their next record, ‘Abraxas’, which went quadruple platinum during 1970.Carlos Santana’s achievements are as varied as his musical influences. He wrote the score to the film ‘La Bamba’ and in 1987 took part in the Rock’n’Roll Summit – the first ever joint US and Soviet rock concert.‘Supernatural’, a record which saw Santana collaborate with various artists including Matchbox Twenty, Eric Clapton, Lauryn Hill and Wyclef Jean, was a huge commercial success for the artist. Released in 1999, Supernatural reached the number one slot in the Billboard Hot 100 and the record went on to be Santana’s biggest sales success, selling over 15 million copies in the United States alone.The Santana Band was the first group to receive the CBS Records Crystal Globe Award for international album sales exceeding five million and in 2000 Santana collected eight Grammy awards, with the song ‘Smooth’ winning both Record of the Year and Song of the Year and the album Supernatural picking up the prize for Album of the Year.In 2002, Santana released another album which featured guest artists including Seal. Although not as successful as Supernatural, the record hit the number five spot on the Billboard Hot 100. 2005 saw Santana join forces with Herbie Hancock to release ‘Possibilities’. The prolific artist released another album in 2005 entitled ‘All That I Am’, which featured collaborations with artists including Steven Tyler of Aerosmith, Kirk Hammett of Metallica fame, hip-hop star Sean Paul and R&B artist Joss Stone.Santana became one of only two bands, the other being the Rolling Stones, to make a top ten album in every decade from the 1960s until the present when he released ‘Guitar Heaven’ in September 2010.In the fall of 2014 Carlos Santana released his memoir “The Universal Tone: Bringing My Story to Light” which offers a page-turning tale of musical self-determination and inner self-discovery, with personal stories filled with colorful detail and life-affirming lessons. It’s a profoundly inspiring tale of divine inspiration and musical fearlessness that does not balk at finding the humor in the world of high-flying fame, or at speaking plainly of Santana’s personal revelations and the infinite possibility he sees in each person he meets.In 2016, Carlos reunited with the revered early ’70s Santana lineup to release an album entitled: ‘Santana IV.’ The album debuted at #5 on Billboard’s Top 200 Chart, #2 on Billboard’s Top Current Chart, #2 on Billboard’s Rock Chart, and #1 on Billboard’s Independent Albums Chart. This album marks Santana’s fourteenth Top 10 album.In 2017, Carlos Santana and Cindy Blackman Santana joined forces with The Isley Brothers (Ronald and Ernie) to release Power of Peace, an album celebrating the timeless sounds of funk, soul, blues, rock, jazz, and pop.Contact a speaker booking agent to check availability on Santana and other top speakers and celebrities.