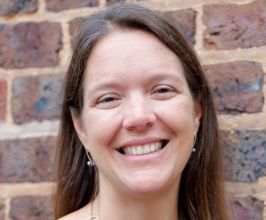 Book Sarah Brosnan for your event

Dr. Sarah Brosnan is a Distinguished University Professor in the departments of psychology and philosophy at the Neuroscience Institute at Georgia State University, Co-Director of the Language Research Center, and Director of the 2CI in Primate Social Cognition, Evolution and Behavior Fellows program. She is also a member of the Brains & Behavior program and faculty in the Center for Behavioral Neuroscience.Brosnan directs the Comparative Economics and Behavioral Sciences Laboratory (CEBUS Lab) and conducts behavioral and cognitive research with nonhuman primates at both the Language Research Center of Georgia State University and the Michale E. Keeling Center for Comparative Medicine and Research of the UT/MD Anderson Cancer Center. She also collaborates with colleagues at Zoo Atlanta, The Wolf Science Center in Ernstbrunn, Austria, the Economic Science Institute, Florida Tech, and numerous other universities around the world.Brosnan’s research has been funded by NSF, NIH, the National Academies Keck Futures Initiative (NAKFI), the Templeton World Charity Fund, the John Templeton foundation, and the Austrian Science Foundation. She is an Editor for Proceedings of the Royal Society of London, Series B and the American Journal of Primatology, and serves on several editorial boards. She has published more than 150 papers and chapters in outlets including Nature, Science, Scientific Reports, PNAS and Current Biology, has edited special issues of Philosophical Transactions of the Royal Society, Proceedings B, Social Justice Research, and the American Journal of Primatology. She is co-editor, with Walt Wilczynski, of the upcoming book “Social Cooperation and Conflict: Biological mechanisms at the interface,” with Cambridge University Press.Brosnan is a Fellow of the APA and SESP and was a fellow to both the Kavli/NAS Chinese and German American Frontiers in Science programs, sitting on the organizing committee for the Chinese Frontiers. She has served in several capacities for the APA and has won numerous awards for her mentoring and research, including the GSU Undergraduate Mentoring award, the inaugural GSU Graduate Mentoring award, the APA Division 6 Cleversys Early Career Award, the Dean’s Early Career Award, the Herbert H Reynolds outstanding alumni award, and the Morton Deutsch Award for the best paper of the year published in Social Justice Research. In 2009, she was named one of the 150 most influential alumni in the 150 year history of her alma mater, Baylor University.Brosnan graduated from Baylor University in 1998 with a BA in University Scholars/Biology and received her PhD from Emory University’s program in Population Biology, Ecology and Evolution, in the Graduate Division of Biological and Biomedical Sciences.Contact a speaker booking agent to check availability on Sarah Brosnan and other top speakers and celebrities.