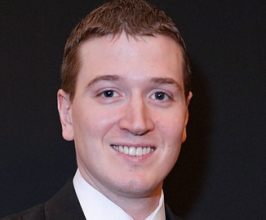 Book Sebastian Dumonet for your event

“You don’t say no to him,” recalls Sebastian Dumonet of the offer he couldn’t refuse. In his early twenties, Dumonet made a secret vow to his sister. By the age of twenty-six he would rise to the position of restaurant director, representing the best and only the best, “wherever that was.” When Joël Robuchon offered him that responsibility in 2013, he accepted the challenge. He was twenty-five.As Director of Operations for both Joël Robuchon restaurants at the MGM Grand Las Vegas, Dumonet manages the first three-star Michelin restaurant in the city, plus the adjoining and equally admired, Michelin one-starred L’Atelier de Joël Robuchon.While the chef is away, Dumonet implements the exacting standards of the Robuchon vision, to such a degree you’d insist the maestro was stationed in the back of the house. “When we put on our suits or chefs’ jackets we come into work to represent him,” he says. “We really do represent something bigger than ourselves.”Dumonet’s path seemed assured from birth, but took a temporary sharp sidetrack. Raised and tutored in a Parisian culinary family, dining appeared his destiny. His father is celebrated chef Jean-Louis Dumonet, his mother followed a front of house career, and his grandfather and uncles were all chefs.Yet his father saw the familial toll taken on three generations of restaurateurs and urged him away from the craft. “Around 9 or 10 my father told me he didn’t want me to work in food and beverage, unless it was something I absolutely loved.” By then, his family’s passion had pushed the Dumonets across the Atlantic, where chef Jean-Louis opened Trois Jean Bistro on New York’s Upper East Side. Split between France and Manhattan and a youth immersed in their restaurant-centric lifestyle, his father’s counsel would eventually take hold. Sebastian looked for another path, transplanted to the U.S., enrolled in university, and applied himself to the study of political science and philosophy.Despite his best shot, he knew something was amiss. “I became disillusioned with American law, very disillusioned with American politics and didn’t know what my fallback plan was. So I went back to my parents to New York for a week. I decided I couldn’t be one of the many millennials who just sat on the couch. So, I packed up my sister’s car and drove to Las Vegas to see if I could figure something out for myself.”Dumonet joined the pre-opening team at the Aria Resort & Casino, wandering onto their $9.2 billion construction site wearing a hard hat. This “foot in the door” led to a side shift to manage Munchbar in Bellevue, WA. And then, a return to Las Vegas.Five months back in Vegas, during an internal readjustment at the Joël Robuchon restaurant, Dumonet had jumped at the chance to fill the vacant role of Assistant General Manager. Noted for his eye for spotting talent, after six months in the post, Robuchon handed him the role of Director of Operations, to not one, but both his restaurants.Now Dumonet drifts between two adjacent Las Vegas worlds. The open kitchen and ruby and onyx sheen of L’Atelier de Joël Robuchon run by Executive Chef Steve Benjamin and the violet and velvet jewel box of Joël Robuchon overseen by Executive Chef Claude Le Tohic.When Robuchon is in Las Vegas Dumonet steps in as his voice, providing translations and interpretation for the chef’s exacting changes, upgrades, and critiques. For Dumonet, those days can also prove a true thrill for diners.“He’s not a reclusive chef, so when he’s in town, he’s on the floor. Guests have the opportunity to see him cook, to see him taste food. To see it actually blessed by him before it gets to the table I think is a phenomenal added touch.”The cultivation of an unmistakable ambiance is crucial to the experience, whether for well-traveled dining connoisseurs or those who have saved their dollars for a once in a lifetime evening. “Recently we had two people propose to their fiancés within half an hour of each other. There’s no better way of defining a special restaurant than to say you want it to be included in one of the most memorable experiences in your life.”Contact a speaker booking agent to check availability on Sebastian Dumonet and other top speakers and celebrities.