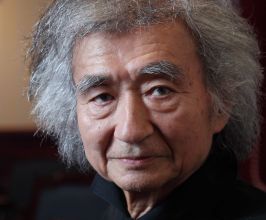 Book Seiji Ozawa for your event

Seiji Ozawa was born in 1935 in Shenyang, China. Learning piano from a young age, Ozawa graduated from Seijo Junior High School and went on to study conducting under Hideo Saito at Toho School of Music.In 1959, he won first prize at the International Competition of Orchestra Conductors held in Besançon, France, and was invited the next summer to Tanglewood by Charles Munch, who was then Music Director of the Boston Symphony Orchestra and a judge at the competition. He proceeded to study under Herbert von Karajan and Leonard Bernstein and over the years to serve as Assistant Conductor of the New York Philharmonic, Music Director of the Chicago Symphony Orchestra’s Ravinia Festival, Music Director of the Toronto Symphony Orchestra, and Music Director of the San Francisco Symphony. In 1973, he became the 13th Music Director of the Boston Symphony Orchestra. During his tenure of 29 years, the longest in the history of American orchestras, he cultivated the BSO into one of the best orchestras in the world.At the official invitation of the Chinese government, Ozawa worked with the China Central Symphony Orchestra (now China National Symphony Orchestra) for a week in 1978. He returned with the BSO a year later in March 1979, deepening musical and cultural exchanges through coaching, study, and discussion sessions with Chinese musicians, as well as concert performances. He has since continued to build upon a strong relationship with China.In autumn 2002, Ozawa became Music Director at Wiener Staatsoper, a position he held until spring 2010. He has a stellar reputation and is tremendously popular in Europe, where he has conducted many orchestras including the Berliner Philharmoniker and the Vienna Philharmonic. He has also appeared in prominent opera houses such as Wiener Staatsoper in Vienna and Teatro alla Scala in Milan.In Japan, he launched the international music festival Saito Kinen Festival Matsumoto in 1992. He also established programs for young musicians to put their education into practice with the Seiji Ozawa Music Academy Opera Project in 2000 and the Seiji Ozawa Music Academy Orchestra Project in 2009. In addition to these activities, he appears as conductor for the New Japan Philharmonic and Mito Chamber Orchestra.Ozawa has been particularly focused on education, holding chamber music study group sessions over the years in Okushiga (Japan) with a focus on the string quartet. In 2005, he founded the Seiji Ozawa International Academy Switzerland aimed towards European music students and in 2011 he created the Ozawa International Chamber Music Academy Okushiga, Asia, to provide an opportunity to outstanding musicians from other countries in the region.Ozawa has been bestowed many honors in Japan and abroad, including: the Austrian Cross of Honour for Science and Art, First Class (2002); Officier de la Legion d’Honneur (2008); Foreign Associated Member in the Academie des Beaux-Arts de l’Institut de France (2008); the Order of Culture, which is the highest honor in Japan (2008); the Giglio D’Oro by Premio Galileo 2000 Foundation of Italy (2008); and honorary membership to the Vienna Philharmonic (2010).Contact a speaker booking agent to check availability on Seiji Ozawa and other top speakers and celebrities.