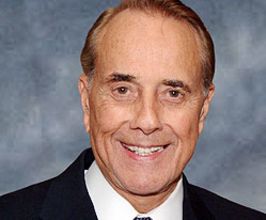 Recognized as one of the most prominent political figures of our time with a distinguished record of service, Bob Dole continues to make a difference in the lives of the American people. Known for his unconventional candor and prairie wit, Dole is a rare quality, especially in Washington.As Chairman of the newly-dedicated National World War II Memorial, Dole led the country in honoring the heroes of his generation and helped enshrine a legacy of sacrifice for freedom. Author of two best-selling books on political humor – Great Presidential Wit, I Wish I Was In The Book and Great Political Wit, Laughing (Almost) All the Way to the White House – a frequent guest on late night talk shows, star of two Super Bowl commercials, and renowned political commentator, Dole is part of the American landscape.In 2005, Senator Dole makes his latest contribution to the country with the publication of his personal World War II memoirs, a chronicle of his harrowing experience on and off the battlefield and the lessons learned through his struggle to survive. One Soldier’s Story is a tribute to those who defended liberty in its darkest hour and his gift to future generations, a destined-to-be classic tale of overcoming adversity and making the most out of life.Following the attacks of September 11, Dole joined forces with former rival President Bill Clinton to serve as Co-Chair of the Families of Freedom Scholarship Fund, assisting the educational needs of the families of the World Trade Center, the Pentagon, and United Flight 93. In January 2003, he was appointed Honorary Co-Chair of the President’s Council on Service and Civic Participation, part of President Bush’s USA Freedom Corps.As the Republican Presidential nominee in 1996, Dole offered himself to Americans as an honorable leader. His candidacy for the White House cemented his reputation as an honest, respected statesman who will long be considered one of the most powerful senators and brilliant legislators of our times. In 1997, he was awarded the Presidential Medal of Freedom as a tribute to his character and contributions to the nation.Ronald Reagan said of Dole as a Senate Majority Leader, “His title of Leader is not just a job title, it’s a description of the man.” President Bush called Senator Dole “a great Republican Leader, as great as any in the past.” Bob Dole is one of only 18 Americans to serve as Senate Majority Leader, and his first stint in that position in the mid-1980’s won praise nationwide. According to Congressional Quarterly, Senator Dole “proved a point that badly needed proving at the time: the Senate could be led.”The American public started seeing the lighter, entertaining side of Senator Dole’s legendary sense of humor with his post-election appearances on The Late Show with David Letterman, Saturday Night Live, The Tonight Show with Jay Leno, Late Night with Conan O’Brien, and The Daily Show with Jon Stewart.Bob Dole was raised on the plains of western Kansas. This tough, common-sense conservative from America’s heartland accumulated political achievements second to none: in addition to becoming the Senate Majority Leader and candidate for President, he also served as Chairman of the powerful Senate Finance Committee, his party’s nominee for Vice President, a member of the House of Representatives, and Chairman of the Republican Party. He earned national acclaim for his leadership on behalf of the disadvantaged and Americans with disabilities, and for his mastery of foreign affairs.During the Second World War, he was a platoon leader in the legendary Tenth Mountain Division in Italy. In 1945, he was gravely wounded on the battlefield and was twice decorated for heroic achievement. His decorations include two Purple Hearts and a Bronze Star with Oak Leaf Cluster. He is married to The Honorable Elizabeth Hanford Dole, current Senator from North Carolina.Senator Dole’s effectiveness as a consensus-builder and his commitment to deficit reduction and economic growth have earned him the admiration of Republicans, Independents and Democrats alike. On issue after issue, Senator Dole is a statesman who has made his mark.Contact a speaker booking agent to check availability on Senator Bob Dole and other top speakers and celebrities.