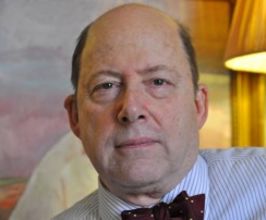 Legendary Figure in Contemporary Journalism; Authority on the Constitution and the Gold Standard

Book Seth Lipsky for your event

Seth Lipsky has been described in the Boston Globe as “a legendary figure in contemporary journalism,” in the Atlantic.com as having “the most interesting mind in journalism,” and in the New Criterion as “one of our age’s great journalists.” Steve Forbes has called his editorials on monetary reform “brilliant” — “the Federalist Papers for a gold standard.”Lipsky is a keynote speaker on a wide variety of issues and topics. He spent 12 years abroad for the Wall Street Journal, six in Asia, and six in Europe. He is a member of the Council on Foreign Relations. In recent years he has been a member of the adjunct faculty at Columbia Journalism School, where in recent semesters he has taught a course on editorial writing called “How to Form an Opinion.” He has served as a juror of the Pulitzer Prizes. In 2010, Lipsky was awarded the Emma Lazarus Prize of the American Jewish Historical Society. Previous recipients include Elie Wiesel, Beverly Sills, Henry Kissinger, George Shultz, and former New York City Mayor Ed Koch.A former foreign editor and senior editor of the Wall Street Journal and a long-time member of the newspaper’s editorial board, he is the Founding Editor of The New York Sun and the author of The Citizen’s Constitution, a widely- and well-reviewed annotated edition of the Constitution of the United States.“A tonic for political depression” is how the Wall Street Journal, in a full-page interview with Lipsky, described his passion for the Constitution. The book received positive reviews in such disparate publications as the New York Times and Fox News (which called it “superb”), the New Republic and the American Spectator.“What I love about the book,” wrote the critic for National Review, “is that it really is about a citizen’s Constitution, not a lawyer’s . . . it harks back to what, not so long ago, was a deeply held American conviction that ordinary people could make their arrangements and resolve their problems without armies of experts.”A 1968 graduate of Harvard College, Lipsky served as a private soldier in the United States Army, assigned as a combat reporter in Vietnam for Pacific Stars and Stripes. After the war he joined the Wall Street Journal, becoming roving correspondent in Asia and a member of the founding staff of the Asian Wall Street Journal, which he served as managing editor. He covered the Fall of Saigon for the Wall Street Journal.During the climactic years of the Cold War, Lipsky was based in Brussels as editorial page editor of the Wall Street Journal’s European edition, for which he and his wife and colleague, Amity Shlaes, witnessed the toppling of the Berlin Wall that the Journal had so long sought. His responsibilities also included the editorial pages of the Asian Wall Street Journal and foreign policy editorials in the parent Wall Street Journal.In 1990, he returned to New York to form a publishing company to bring out in English the famed Forward newspaper that had been published for nearly a century in the Yiddish language. Lipsky was president, chief executive officer, and editor of the Forward for a decade.In 2000, Lipsky and his partners sold their interest in the Forward and founded The New York Sun, of which he was also president, chief executive officer and editor. Lipsky purchased The New York Sun in 2008, and the paper is now issued on the Web at www.nysun.com. Lipsky is married to the journalist Amity Shlaes. They and their four children reside in New York City.Contact a speaker booking agent to check availability on Seth Lipsky and other top speakers and celebrities.