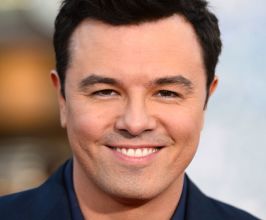 Book Seth MacFarlane for your event

Seth MacFarlane, the talented voice actor, producer, animator, comic and writer, is best known for creating the popular animated sitcoms Family Guy, American Dad! and The Cleveland Show.One of the most popular animated series of all time, Family Guy is currently a $1 billion dollar franchise. It has garnered numerous industry awards including several Emmy wins. Its spinoff, The Cleveland Show, debuted to top ratings and was nominated for a People’s Choice Award for Best New TV Comedy.By the age of five, MacFarlane knew that he wanted to pursue a career in animation. After graduating from the Rhode Island School of Design, MacFarlane got a job at Hanna-Barbera Productions (now Cartoon Network Studios) where he worked as a writer and storyboard artist on several shows, including Johnny Bravo, Cow and Chicken, and Dexter’s Lab.FOX Network asked MacFarlane to produce a partial pilot for a comedy series and Family Guy was born. It premiered after the Super Bowl in January 1999 and at the age of 24, MacFarlane became television’s youngest executive producer. Canceled by FOX in 1992, the fan outcry was loud indeed. The exceptional sales of the Family Guy DVDs –combined with the high ratings of its reruns on Cartoon Network—soon got the show back on the air where it still reigns as a cultural icon.In addition to co-creating another animation hit, American Dad! and voicing several of its characters, MacFarlane has appeared in sitcoms, comedy and news programs, independent films, and other animated shows. MacFarlane also launched his own channel on YouTube, called SethComedy.A talented singer as well MacFarlane is influenced by the retro classics with lush orchestras and the Rat Pack style, and released a debut album of 1940s and ’50s show tunes in 2011 called “Music Is Better Than Words.” An experienced live performer as well, he’s having played to sold out audiences at London’s Royal Albert Hall and New York’s Carnegie Hall.MacFarlane is a supporter of the Democratic Party. He has donated over US $200,000 to various Democratic congressional committees and to the 2008 presidential campaign of then-U.S. Senator Barack Obama. He has stated that he supports the legalization of cannabis. MacFarlane serves on the board of directors of People for the American Way, a progressive advocacy organization. MacFarlane is also passionate about his support for gay rights. MacFarlane, in recognition of “his active, passionate commitment to humanist values, and his fearless support of equal marriage rights and other social justice issues”, was named the Harvard Humanist of the Year in 2011.Contact a speaker booking agent to check availability on Seth MacFarlane and other top speakers and celebrities.