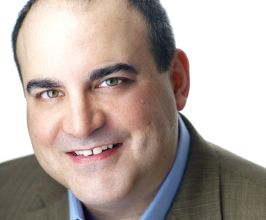 Book Shelly Palmer for your event

Shelly Palmer is Fox 5 New York’s on-air tech expert (WNYW-TV) and the host of Fox Television’s monthly show Shelly Palmer Digital Living. He also hosts United Stations Radio Network‘s, Shelly Palmer Digital Living Daily, a daily syndicated radio report that features insightful commentary and a unique insiders take on the biggest stories in technology, media, and entertainment.He is managing director of Advanced Media Ventures Group, LLC an industry-leading advisory and business development firm, as well as Technology Chairman and a member of the Executive Committee of the National Academy of Television Arts & Sciences (the organization that bestows the coveted Emmy Awards). Along with his contributions to the advancement of television, Palmer is a pioneer in the field of Internet technologies. He is the patented inventor of the underlying technology for Enhanced Television used by programs such as ABC’s Who Wants to Be a Millionaire and ESPN’s Monday Night Football. Mr. Palmer is well known for his Emmy Award-nominated series of “Hi-Tech” television specials created for Fox Television as well as his Emmy Award-nominated series Live Digital with Shelly Palmer created and produced for NBC Universal. He also created Midnight Money Madness for TBS, created and produced HotPop, a teen lifestyle and music show, for Starz/Encore. Mr. Palmer has directed and produced dozens of national television commercials and has also enjoyed a highly distinguished career as a composer and producer.He was the recipient of the American Society of Composers, Authors and Publishers (ASCAP’s) 12th Annual Film and Television Music Award for ABC’s hit series Spin City. He was also recognized the following season in the category of “Most Performed Television Themes.” Palmer’s music credits include the theme songs for Live with Regis & Kelly, Rivera Live and MSNBC as well as the digital debut of the “real” cat singing the classic “Meow, Meow, Meow, Meow” for Meow Mix. Palmer is a popular speaker and moderator at technology and media conferences hosted by industry organizations, like: The Consumer Electronics Show (CES), The National Association of Broadcasters Convention (NAB), The National Show presented by the National Cable Television Association (NCTA), The National Association of Television Program Executives (NATPE), Digital Signage Expo (DSE) and other major trade events. He is a guest lecturer at the MIT Media Lab, Stern Graduate Business School at NYU, The Columbia Institute for Tele-Information (CITI) at Columbia University, Tsinghua University, Rutgers Business School and other top tier colleges and universities. A graduate of New York University’s Tisch School of the Arts, he is a regular technology commentator for CNN and CNNi, a weekly columnist for the Jack Myers Media Business Report and the Huffington Post.Palmer is the author of “Television Disrupted: The Transition from Network to Networked TV” 2nd Edition (York House Press, 2008) the seminal book about the technological, economic, and sociological forces that are changing everything, “Overcoming The Digital Divide: How to use Social Media and Digital Tools to Reinvent Yourself and Your Career” (York House Press, 2011) and “Digital Wisdom: Thought Leadership for a Connected World” (York House Press, 2013).Contact a speaker booking agent to check availability on Shelly Palmer and other top speakers and celebrities.