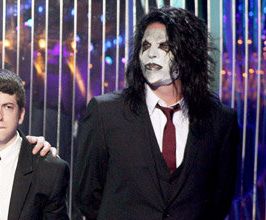 Slipknot is a heavy-metal band consists of nine members, all of whom are male, who becoming popular because of its extreme music and dramatic stage performances.

Book Slipknot for your event

Slipknot is a heavy-metal band consists of nine members, all of whom are male, who becoming popular because of its extreme music and dramatic stage performances. This group was firstly formed in the late 1995 in the unlikely locale of Des Moines, IA; in which it has 3 percussionists, 2 guitarists, 1 bassist, a DJ, a sampler and a lead singer. Aside from their real names, members of the band are also referred to by numbers 0 through 8 and each of them also wears a mask, which they mention to be part of their personality, like an extension of their body. To explain that, all the group members believe that wearing the masks shows more of what they are like inside and what the music does to them inside.To be number 0 in the band is Sid Wilson who runs the turntables. He is in charge of the background noises and stuff. His mask is awesome, it is a skull with long hair. Next number 1 is Joey Jordison who is their drummer. He was born on April 26, 1975, and was the one who created the Slipknot “S” logo and thought of refering to their fans as …‘maggots’. His mask is a white mask with goth make-up. Number 2 is Paul Gray who plays the bass guitar. He is a co-founder of Slipknot and is half black. Number 3 is Chris Fehn, who is the band’s custom percussionist. He was born on February 24, 1974, and is considered to be the comedian of the group. Guitarist Jim Root is the number 4. He was born on October 2, 1971, and used to be a very shy guy until he became a part of Slipknot. His mask looks like Mike Myers from “Halloween” but with scars vertically.To continue, Craig Jones is the number 5. He used to be the band’s guitarist but switches to samples and media stuff. He was born in 1972 and his nickname is 133 MHz. Number 6 is Shawn Crahan, who is the band’s another custom percussionist. He was born on September 24, 1969. He is the co-founder of Slipknot and was the one that originally thought of using masks to make them stand out. He is the oldest member of the group and he does some backup vocals too. Mick Thomson, the guitarist, is number 7. He was born on November 3,Firstly formed in late 1995 in the unlikely locale of Des Moines, IA, Slipknot had experienced some early personel shifts before they finally settled around the nine-piece lineup in order from number zero to number eight. Early on their first formed, the music scene in Des Moines wasn’t much to speak of, and the band’s big-time ambition was usually met with disbelief and ridicule, which provided the initial spark for its mostly anonymous stage visuals. And so they worked on themself to create their own distinct music, and on Halloween 1996, Slipknot themself released an album called “Mate. Feed. Kill. Repeat.,” which began to build a buzz around the group once it found its way to several labels. What a fortunate that the album was well-received, and several major record labels became interested in the group. As a result, the album was picked up …for distribution by the Nebraska-based -ismist label, and also caught the attention of Roadrunner Records, which signed Slipknot in 1997.Under the Roadrunner Records, Slipknot worked with producer Ross Robinson, with whom they recorded their official, self-titled debut album “Slipknot” which was released in June 1999. With the release of this album, the band gradually built an audience through near-constant touring, working their way up to the summer Ozzfest package tour, which really expanded their audience even more. Their live shows were also much-discussed hit with metal fans, and the band performed with such energy that Crahan gashed his head open on his own drum kit twice that summer, requiring stitches both times. Moreover, this debut album had spawned two tracks “Wait and Bleed” and “Spit It Out” that got the band some airplay, but most of the buzz, in fact, came from touring and word of mouth. Above all, in the spring of 2000, “Slipknot” was certified platinum; becoming the first such album in Roadrunner’s history.Shortly, in 2001, the follow-up of the debut album was released and but was debuted only at number three on the Billboard Magazine album charts. The group once again toured heavily to promoteDespite their success, Slipknot is often pointed by many critics due to their appearance, which many attribute to shock marketing and are described as “gimmicky”. Moreover, they are also accused of creating positions within the band for the sole purpose of increasing the total number of members, for example no other popular bands hold a position for a …sampler, even if samples are included in the music.Soon after the release of fourth album, the band came to another hiatus and announced that they will remain that way until 2008. Each members are busy with their solo projects especially the frontman Corey Taylor who runs a highly successful band Stone Sour. Due to individual success, speculations spread that this hiatus came out as the end of the band. But Corey explained in 2007 that the band would do at least one more album before “we don’t know what happen”.Contact a speaker booking agent to check availability on Slipknot and other top speakers and celebrities.