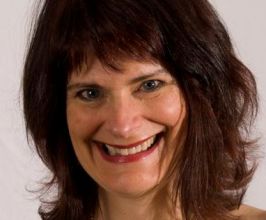 Book Stacy Dymalski for your event

Stacy Dymalski is an author, blogger, comedian, talk show host, award-winning corporate speaker, filmmaker and busy mom of two teenage sons. Any more than that and she’ll spontaneously combust. Her latest book, “Confessions of a Band Geek Mom,” chronicles her attempt at juggling career and motherhood while raising two musically gifted kids in the mountains of Utah. In between carpools, midnight comedy shows, and lobbying for sex education in public schools (so our kids don’t grow up thinking the missionary position involves a bicycle and a doorbell) Stacy documents the dichotomy of her comical “parenting versus career” journey in her books, stand-up comedy, and corporate speaking.Stacy is also the host of the hilarious Internet TV talk show “Mother Bloggers” (channel 7 on www.FirstRun.tv), in which five witty, prolific mommy bloggers get together and gab about stuff that really cheeses them off. Because, you know, revealing your entire life in blog posts is just not enough. The show is kind of like “The View” meets “Desperate Housewives,” except Stacy claims to be prettier than Barbara Walters, but not quite as hot as Teri Hatcher.In between publishing and public speaking, Stacy pens a popular comedy blog called “From Nonsense to Mom’s Sense of Humor, How My Life as a Standup Comic Prepared Me for Motherhood.” With thousands of subscribers eager to read her posts she blogs at least twice a week about the irony and humor found in the minutia of everyday life, and responds to every reader comment … even the ones from her children asking when dinner will be ready.As a filmmaker, Stacy has written, directed, and produced TV shows and feature films, but is most noted for co-writing (with her writing partner Zack Van Eyck) and directing the dark comedy feature film “Jupiter Landing.” Her screenplays and films have won several awards and have screened at film festivals all over the world, including Berlin International Film Festival, Telluride IndieFest, and the Chicago International Children’s Film Festival.As a stand-up comic, Stacy got her start at the Comedy Store in La Jolla, but has graced the stages of The Comedy Store in Hollywood, The Improv in Santa Monica, and countless other clubs across the country. She’s also been a finalist in the Southern California Comedy Competition, and a member of and sketch writer for the improv troupes The Fault Line Players(http://faultlineca.tripod.com/index.html) in San Diego and Off the Top Comedy in Park City, UT.Today Stacy is a credentialed and active member of Toastmasters. In 2012 she was a semi-finalist in the Toastmasters International Speech Contest, in which she competed for the title of World Champion of Public Speaking. Her award-winning speech, “Wynton Marsalis Had My Back” is the flagship chapter and title of her new book of humorous essays coming out in Fall 2013.Contact a speaker booking agent to check availability on Stacy Dymalski and other top speakers and celebrities.