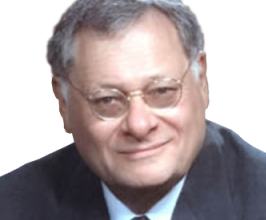 Book Stephen Trachtenberg for your event

Stephen Joel Trachtenberg is one of the most high profile and dynamic leaders in education today. Having served as a university president for over 30 years, he has greatly influenced and shaped the field of American higher education. Trachtenberg served as the 15th president of The George Washington University for nearly two decades, after arriving in 1988 from the University of Hartford, where he had been president for 11 years. He currently presides as President Emeritus and University Professor of Public Service at the University and is an adviser to Korn/Ferry International, where he is helping to find the next generation of university leadership. Prior to his position at the University of Hartford, Trachtenberg served for eight years at Boston University as vice president for academic services and academic dean of the College of Liberal Arts. Earlier, in Washington, D.C., he was a special assistant for two years to the U.S. Education Commissioner, Department of Health, Education and Welfare. He has been an attorney with the U.S. Atomic Energy Commission and a legislative aide to former Indiana Congressman John Brademas.In his book, “Big Man on Campus: A University President Speaks Out on Higher Education” (2008), Trachtenberg reflects on his years of experience in transforming America’s educational landscape and assesses the current state of higher education. In addition, he has published, “Presidencies Derailed: Why University Leaders Fail and How to Prevent It” (2013), “Reflections on Higher Education” (2002), “Thinking Out Loud: The Wit and Wisdom of Stephen Joel Trachtenberg” (1998), and “Speaking His Mind” (1994). He is co-editor of the book “The Art of Hiring in America’s Colleges & Universities”. He authored chapters in the books “Productivity & Higher Education,” “Leaders on Leadership: The College Presidency,” and “Academic Leaders as Managers.” His articles have appeared in publications including The Educational Record, The Association of Governing Boards of Universities and Colleges AGB Reports, Journal for Higher Education Management, The College Board Review, The Washington Post, and The New York Times. Trachtenberg also has served as a consulting editor to The Journal of Education and The Presidency.Stephen earned a Bachelor of Arts degree from Columbia University, a Juris Doctor from Yale University, and a Master of Public Administration degree from Harvard University, and is a member of Phi Beta Kappa.Contact a speaker booking agent to check availability on Stephen Trachtenberg and other top speakers and celebrities.