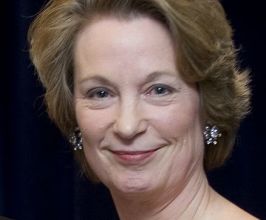 Book Susan Eisenhower for your event

Susan Eisenhower is one of America’s top energy security strategists. A political Independent, she is an outspoken advocate for setting national priorities and advancing a civil, fact-based discourse on America’s challenges. She is President of the Eisenhower Group, Inc. and Chairman of the Eisenhower Institute’s Leadership and Public Policy Programs.Eisenhower, appointed a member of the U.S. Secretary of Energy’s Blue Ribbon Commission on America’s Nuclear Future, has also amassed 30-plus years of foreign affairs experience. She has served on NASA and DOE appointed commissions on space and nuclear issues for both Republican and Democratic administrations.In the past several years, Eisenhower has focused on the nation’s aging electrical energy infrastructure to help develop strategies for modernizing the electrical power grid. A similar nation-wide effort was undertaken on the Interstate Highway system championed by her grandfather, President Dwight Eisenhower, in the 1950s.Eisenhower has shared her insights on CNN, Fox News and MSNBC — as well as numerous shows, including The Situation Room with Wolf Blitzer, The Newshour with Jim Lehrer, Hardball with Chris Matthews, One on One with John McLaughlin, to name a few. She is the author of four books, including Breaking Free, Mrs. Ike, and Partners in Space: US-Russian Cooperation After the Cold War.Whether speaking about the future of energy and infrastructure, international affairs, or leadership and politics, Eisenhower tackles them from a strategic perspective, providing critical thinking to organizations, business, and governments. The quintessential scene-setter, she authoritatively puts national and international public policy, past, present, and future, into context for a country in need of solutions and a clear direction.Contact a speaker booking agent to check availability on Susan Eisenhower and other top speakers and celebrities.