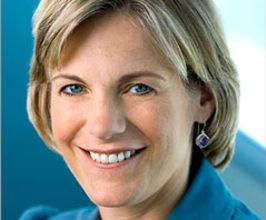 Sue serves as Entrepreneur-in-Residence (EIR) at Harvard Business School (HBS). In this role, Ms. Decker is involved in case development activities, works with students, and helps develop and deliver portions of the January 2010 Silicon Valley Immersion Program for HBS students.She served as President of Yahoo! Inc. from June 2007 to April, 2009. Ms. Decker was responsible for all of the global business operations … of Yahoo!, including sales, product marketing, product, and distribution across the three major customer groups of audience, advertisers and publishers.Ms. Decker served as Chief Financial Officer of Yahoo! Inc., from June 2000 to June 2007 and as its Executive Vice President of Finance and Administration from January 2002 to December 2006.Ms. Decker was a key participant in determining Yahoo!’s business strategy, and was responsible for managing and setting all aspects of its financial and administrative direction within key functional areas, including finance, human resources, legal and investor relations. Prior to joining Yahoo! in June 2000, Ms. Decker was with Donaldson, Lufkin & Jenrette (DLJ) for 14 years, where she started as an equity research analyst. She served as Equity Analyst of Donaldson, Lufkin & Jenrette Securities Corp., Research Division. Ms. Decker served as Director of Global Equity Research of Donaldson, Lufkin & Jenrette from 1998 to 2000 and served as its Global and Domestic Head of Research from August 1986 to May 2000.Ms. Decker has been a Director of Intel Corporation since November 2006. She has been a Director of LegalZoom.com, Inc. since October 20, 2010, Costco Wholesale Corp., since October 13, 2004 and Berkshire Hathaway Inc. since May 5, 2007. She is a trustee of Save the Children. She served as a Director of Pixar, Inc. (also known as Pixar Animation Studios) from June 2004 to May 2006 and The Stanford Institute for Economic Policy Research (SIEPR) from March 2005 to May 2007.Ms. Decker holds a Bachelor of Science degree from Tufts University with Double Majors in Computer Science and Economics. She holds a master’s degree in business administration from Harvard Business School.Contact a speaker booking agent to check availability on Susan L. Decker and other top speakers and celebrities.