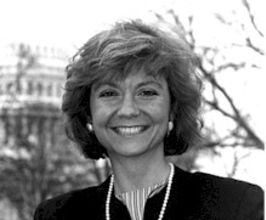 Book Susan Molinari for your event

A Member of Congress from 1990 to 1997, Ms. Molinari quickly became “one of the most distinctive Members of the House” and “one of the most visible voices for her party” according to the authoritative Almanac of American Politics. As a result, after just four years in Washington, and just weeks after the election of the first GOP House majority in 40 years, Ms. Molinari was elected by her colleagues to the eight person Republican Majority Leadership, making her the highest ranking woman in the Congress.Unanimously re-elected to the House Leadership in 1996, Ms. Molinari also enjoyed another distinction that year as she was selected by GOP Presidential candidate Senator Robert Dole as Keynote Speaker at the Republican National Convention in San Diego.Ms. Molinari was an effective leader in the fight for crime victims, passing sweeping judicial reforms to toughen laws on repeat rapists and child molesters and to increase funding for the Violence Against Women Act. She also won passage of measures to enhance adoption, and promote breast cancer awareness and research funding.As a member of the House Budget Committee, she was at the forefront of producing Congress’ first balanced budget in 29 years. Ms. Molinari chaired the Transportation and Infrastructure Committee’s Railroad Subcommittee, which passed legislation to overhaul the nation’s Amtrak passenger rail service. As chair, she also implemented the sunsetting of the Interstate Commerce Commission, creation of the Surface Transportation Board, and played a key role in fashioning the historic, five year, multi-billion dollar transportation-funding bill (TEA-21) adopted in 1997.Prior to Congress, Ms. Molinari was twice elected to the New York City Council, where she was Minority Leader. In 1997, she left Congress to co-anchor the team inaugurating CBS News Saturday Morning, where she conducted on-air interviews of national and international newsmakers. Today, Ms. Molinari is a regular contributor to CNBC’s Capital Report.In addition to her broadcast experience, Ms. Molinari has addressed hundreds of audiences on politics, government and the media in nearly every state. She has lectured before business and trade organizations, universities and civic groups from coast-to-coast and was selected as one of the Top Five Speakers of 1998 by the members of Toastmasters International.She is the co-author of the book Representative Mom: Balancing Budgets, Bill and Baby in the U.S. Congress(Doubleday, 1998). Ms. Molinari has also authored scores of articles published by national magazines and daily newspapers on a wide variety of subjects, ranging from the role of women in politics to national fiscal policy.Ms. Molinari was selected as a Visiting Fellow at the prestigious Institute of Politics/ Kennedy School of Government at Harvard University in 1998. She was chosen as Glamour Magazine’s Woman of the year in 1996 and by Time Magazine as one of forty of the nation’s most influential people under age forty in the nation in 1994. In 2003 Susan was recognized for her efforts to develop a framework to address the national housing crisis. As co-Chair of Millennial Housing Commission, the National Housing Conference named her “Housing Person of the Year.”Ms. Molinari chairs the Century Council, a national, not-for-profit organization committed to reducing drunk driving and underage drinking and is the national spokesperson for Americans for Consumer Education and Competition, a financial literacy organization. She also served as a member of the Bush-Cheney Transition Advisory Committee.Ms. Molinari is a member of several boards including the Toyota North America Diversity Advisory Board, Protective Life Insurance and the March of Dimes Advisory Board.Born and raised on Staten Island, Ms. Molinari is a third generation public servant. Her grandfather was the first Italian-American immigrant elected to the New York State Assembly and she was elected to Congress succeeding her father, Guy V. Molinari, who became the Borough President of Staten Island.In her speeches, Ms. Molinari reflects on her dramatic rise through the political ranks, and her tenure as the highest-ranking woman Republican in the House. She speaks poignantly and personally about issues in which she continues to be personally involved including the fight against drunk driving and under-age drinking, breast cancer awareness and treatment, crime victims, rights, women’s rights, financial literacy and housing issues.Ms. Molinari is married to former New York Congressman Bill Paxon, now a senior advisor at the law firm of Akin, Gump, Strauss, Hauer and Feld, and they have two daughters.Contact a speaker booking agent to check availability on Susan Molinari and other top speakers and celebrities.