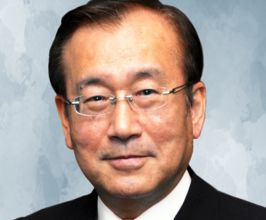 Book Tadatoshi Akiba for your event

Mayor Akiba is the first non-native to be elected mayor of Hiroshima. It is a testimony to his long record of opposition to nuclear weapons that the survivors of the historic bombing have embraced him as a spokesperson for their cause and legacy.Mayor Akiba is the current president of the Mayors for Peace, an organization the mayors of Hiroshima and Nagasaki established in 1982 with a mission to unify and facilitate coordination among the cities that support the total abolition of nuclear weapons. Its primary goal is to work internationally to raise consciousness about nuclear weapons. The Mayors for Peace is also formally committed to pursuing lasting world peace addressing starvation, poverty, refugee welfare, human rights abuses, environmental destruction, and other problems that threaten peaceful coexistence.Through his strength of will and persistence, Mayor Akiba is credited with increasing membership in the Mayors for Peace to include over 730 cities in 111 countries and regions throughout the world that have formally expressed support for their agenda. With Hiroshima’s image of International Peace Culture City, Mayor Akiba’s leadership in the nuclear disarmament community serves the city well.In November 2003, the Mayors for Peace, supported by the cities of Hiroshima and Nagasaki, launched an Emergency Campaign to Ban Nuclear Weapons which has received strong endorsements with resolutions passedby the European Parliament, the United States Conference of Mayors, International Physicians for the Prevention of Nuclear War (IPPNW), and Abolition 2000. As a result, the Nuclear Age Peace Foundation awarded the Mayors for Peace their Global Citizen Award. The campaign is also known as the 2020 Vision Campaign, since it aims for the achievement of a nuclear-weapon-free world by the year 2020.As a first step in this campaign, Mayor Akiba led a delegation of city officials from 12 countries to the NPT Preparatory Committee Meeting at UN Headquarters in New York. Through lobbying the government representatives, this delegation contributed enormously toward making the nuclear threat an urgent issue. Their next goal is to bring 100 mayors to New York for the NPT Review Conference in May 2005, and to facilitate anti-nuclear demonstrations in New York in May and hundreds of cities around the world on August 6, 2005 – the 60th anniversary of the bombing of Hiroshima.Mayor Akiba, a former university professor who once taught at American University in Washington, DC and Tufts University in Boston, is a strong advocate for establishing Hiroshima-Nagasaki Peace Study courses in colleges and universities around the world. With the average age of the A-bomb survivors now over 72, the cities ofHiroshima and Nagasaki are eager to pass on the memory to future generations. Mayor Akiba has been making personal appeals to university presidents and professors worldwide to include the historical significance of the bombing in their teaching curriculums.American Program Bureau can also arrange for other speakers from The Mayors for Peace 2020 Vision Campaign. They include, Mr. Aaron Tovish, International Campaign Manager, and Steve Leeper, US Representative of Mayors for Peace.Contact a speaker booking agent to check availability on Tadatoshi Akiba and other top speakers and celebrities.