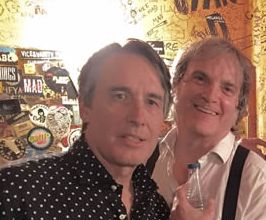 Book The Long Ryders for your event

The Long Ryders are an American alternative country and Paisley Underground band, principally active between 1983 and 1987, who have periodically regrouped for brief reunions (2004, 2009, 2016) in answer to fan demands.The Long Ryders were originally formed by several American musicians who were each multi-instrumentalists and influenced by Gram Parsons, The Byrds and various country and punk rock groups. They were named after the Walter Hill film, The Long Riders. The band featured Sid Griffin on guitar, autoharp and bugle; Stephen McCarthy guitar, steel guitar, mandolin and banjo; Des Brewer as bassist (later replaced by Tom Stevens); and Greg Sowders playing drums and percussion.Although two members were transplants from the American South, they became a popular Los Angeles rock band, forming in the early 1980s and originally associated with a movement called the Paisley Underground. With a sound reminiscent of Rubber Soul-era Beatles, electric Bob Dylan, Buffalo Springfield and The Flying Burrito Brothers, but with a harder edge, they anticipated the alternative country music of the 1990s by a decade. Their early work contained influences of both punk (largely attributable to devoted record collector Griffin) and old school country (championed by McCarthy). Former Byrd Gene Clark joined them on their first full-length album, adding vocals to the song “Ivory Tower” on the 1984 Native Sons.The Long Ryders formed from the ashes of the Los Angeles band The Unclaimed. Their initial studio release the “10-5-60” EP consisted of Griffin, Brewer, McCarthy, and Sowders. Brewer left after the release of “10-5-60”. He was replaced by Tom Stevens and that line-up remained in place as a recording unit until their eventual demise.The group disbanded in 1987, but reunited to perform at the 2004 Glastonbury Festival and several other major events. The Long Ryders played their first live dates in the U.S. in more than 20 years when they headlined in 2009 at The Earl in Atlanta, Georgia, and in 2014 at the Troubadour in Los Angeles. A live album resulted from the 2004 reunion tour. In January 2016, Cherry Red Records released a Long Ryders box set, Final Wild Songs, composed of all the material from their three full-length albums, their one EP, various demos and rarities, and a previously unavailable 15-song performance from a Benelux radio appearance in March 1985. Mojo magazine, in its February 2016 issue, gave the collection a lead review, saying, “They unwittingly invented Americana, but seldom receive credit for it. This 4-CD box set puts the record straight.” The band subsequently played 12 dates on the Continent and in the United Kingdom in early 2016.Apart from occasional Long Ryders activity, Griffin, who relocated to London, has kept busy as a solo artist and bandleader (The Coal Porters, Western Electric), and as a music journalist and author. His latest book is Shelter from the Storm: Bob Dylan’s Rolling Thunder Years (Jawbone Press, UK/U.S., 2010), which was preceded by Million Dollar Bash: Bob Dylan, The Band & the Basement Tapes (Jawbone Press, UK/U.S., 2007). The latter volume was reissued in 2014 to coincide with the release of Bob Dylan and The Band: The Basement Tapes Complete six-CD collection, to which Griffin contributed liner notes. McCarthy, after a stint leading his own band, Walker Stories, and appearing on the 1990 multi-artist album True Voices in a duet with Carla Olson on the Tom Jans song “Loving Arms,” returned home to Richmond, Virginia; he played in the indie super group Gutterball with Steve Wynn and fellow Richmondites Bryan Harvey and Johnny Hott of House of Freaks, and in 2003 began playing with The Jayhawks. Stevens returned to his native Indiana, earned a degree in computer science and continues to release solo albums. Additionally Sowders, who was married for a time to singer Lucinda Williams, went to work in music publishing. Brewer continued to play the Los Angeles circuit, first accompanying various female singer-songwriters, and then moving on to the old school country band, the Misbegotten Cowboys.Contact a speaker booking agent to check availability on The Long Ryders and other top speakers and celebrities.