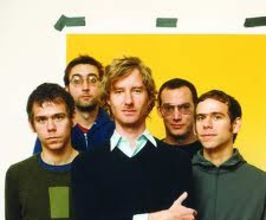 Book The national for your event

On New Year’s Eve 2004, I ran into The National’s singer, Matt Berninger, at a party in Brooklyn. He looked pretty much as he had the last couple of times I’d seen him, like he’d been locked up at home for days on end, trapped in thoughts, books, and videotapes. An old friend asked him what it was like to have left behind the world of regular employment, and I overheard this reply: “Don’t get too into your band. You’ll be poor, and happy, and never want to do anything else ever again.”All you need to know about The National is that they gave up good jobs for this. But perhaps you want more.They are five friends from Cincinnati, Ohio, who started making music in 1999 when they found themselves living near one another again in Carroll Gardens, Brooklyn. They weren’t looking to take over the world with a demo and matching outfits. Rather, music was their way of letting off steam from those good jobs. Records are what they talked about when they went out drinking together, when they ate together, when they played wiffle ball in the summertime.Simply put, songwriting allowed The National to deepen their conversations. It’s how they broached the topics they really wanted to talk about — how they were past the halfway mark between twenty and thirty, and speeding toward a kind of permanence they never expected; how they pleased and disappointed their mothers and fathers; how flings had become girlfriends, and girlfriends, wives.Thankfully, the band’s pre-existing bonds lent this musical conversation an unusual intimacy. The National contains two pairs of brothers — Aaron Dessner (guitars, bass) and Bryce Dessner (guitar), Scott Devendorf (guitar; bass) and Bryan Devendorf (drums). Matt sings because he’s taller, blonder, and older than the rest.Their self-titled debut album “The National” (Brassland 2001) was recorded and released before they had played even a single show, before the music spilled far from their heads. They cut the album with engineer Nick Lloyd and formed a label with a writer (yours truly, Alec Bemis), so those recordings could be released. A few fans were gained, some friends were made, but not much really happened.The National made a second album, “Sad Songs for Dirty Lovers” (Brassland/Talitres 2003). The staff was the same, though Peter Katis, who produced both Interpol records, helped produce and mix, and Australian composer Padma Newsome from Clogs collaborated on arrangements and strings. Rolling Stone and many other magazines noticed this one, and when it made its way to Europe, magazines the band had never heard of began saying it was one of the years best.A show at their favorite bar became a van ride to neighboring cities, became a plane ride to Europe, became two summers overseas. Their ties to those good jobs slackened.It was the press attention in the UK that got the attention of Roger Trust, A&R for Beggars Banquet – who read a review and thought it would be something he would like. Strangely enough, within hours of reading that review he received a call from someone informing him that the band was looking for a label. Several months later he saw them live and was completely impressed.the rest they say is history!Although The National have now signed to Beggars Banquet, they continue on their own path. Four of them have moved even further out in Brooklyn to Ditmas Park, where there is space and familiar suburban streets and even Geese on Beverly Road. Their new album, “Alligator”, much of which was recorded at their homes in Ditmas Park, was engineered by Paul Mahajan, who has worked with the Yeah Yeah Yeahs and TV on the Radio. Padma Newsome camped out for a month with the band, and Peter Katis added more production and mixed the record at his house in Bridgeport, Connecticut.Matt Berninger’s potent baritone still intones about matters fraught and funny and sad; about record collections, missing persons and medium-sized American hearts. But the record’s not simply gothic or miserablist — more like the plays of Tennessee Williams, it’s full of peculiar intimacies and awkward grace. Alligator’s heroes are reckless and possessed seducers, but they are apologetic ones. In The National’s imaginings, in songs alternately lush and spare, there is something twilit and dreamy worked out in the basement of our brains.Contact a speaker booking agent to check availability on The national and other top speakers and celebrities.