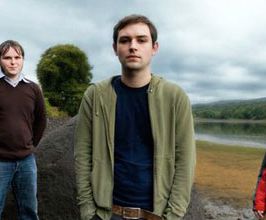 Book The Twilight Sad for your event

Distinguished by James Graham’s heavy Scottish accent, an accordion, and oodles of noise, the Twilight Sad rose from Glasgow, Scotland, in late 2003 with the lineup of Graham (vocals), Andy MacFarlane (guitar, accordion), Craig Orzel (bass), and Mark Devine (drums). After playing a couple of shows in Glasgow that featured extensive pieces of music using an abundance of instruments, they holed up in the studio to write new material. In September 2005, with four new songs in hand, they sent a demo to Fat Cat. The label ended up putting them on the bill of a showcase with the Mutts, Charlottefield, the Rank Deluxe, and Frightened Rabbit. The Twilight Sad’s debut EP was issued in the U.S. in November 2006; the full-length “Fourteen Autumns & Fifteen Winters” arrived the following April. The 2008 EP “Here, It Never Snowed. Afterwards It Did” featured reworkings of several of the album’s songs with simpler, more acoustic arrangements, plus a cover of Daniel Johnston’s “Some Things Last a Long Time.” “Killed My Parents and Hit the Road,” which featured more covers, including songs by the Smiths and Joy Division among its previously unreleased tracks, also arrived that year. The Twilight Sad continued to tour as they worked on their second album, playing dates in the U.S. with Mogwai as well as appearing in the U.K. Tracks from the album began appearing online in spring 2009, with “Reflection from the Television” premiering on Pitchfork’s website that May; the single “I Became a Prostitute” arrived that August. “Forget the Night Ahead,” which had a darker, more streamlined approach than the band’s earlier work and was co-produced by guitarist McFarlane and the Delgados’ Paul Savage, was released in the fall. By February 2012, Twilight Sad strayed from their shoegaze “Wall of Sound” leanings to offer “No One Can Ever Know,” which adopted a cold, aggressive, industrial-influenced approach with help from influential British producer Andrew Weatherall (Primal Scream). The band went further in this electronic direction with a remixes collection featuring Com Truise, Liars and Optimo that was released late that year. The band weathered departure of keyboardist Martin Doherty (who left to pursue his other group Chvrches), recording 2014’s “Nobody Wants to Be Here and Nobody Wants to Leave” at Mogwai’s Castle of Doom studio. Mixed by Peter Katis — who also worked on “Fourteen Autumns and Fifteen Winters” — the album reflected all of the past and present aspects of the Twilight Sad’s sound.Contact a speaker booking agent to check availability on The Twilight Sad and other top speakers and celebrities.