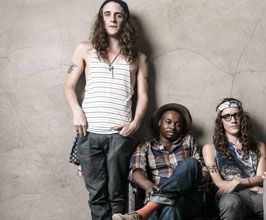 Book The Weeks for your event

The Weeks are an indie rock band from Jackson, Mississippi.The band was formed by Cain Barnes, Chaz Lindsay, Cyle Barnes, Peyton Randolph and Samuel Williams in March 2006 when they were between 14 and 16 years old. Ranolph, of The Da Vincis, left the band after two rehearsals and was replaced by Damien Bones. The band signed to the Esperanza Plantation label, with the debut album, Comeback Cadillac, released in July 2008. The album blended southern rock and alternative, and featured a duet with labelmate Allie Peden on “Sailor Song.” Rilo Kiley, The Mars Volta, and My Morning Jacket have been suggested as band influences. Their debut EP, Rumspringa, followed in 2009.After some lineup changes that left them with a four piece of the Barnes twins, Bone and Williams, the band relocated to Nashville, TN. In March 2011, they returned to Water Valley, MS to work with Winn McElroy at his Black Wings Studio on the eight songs that encompass a 12″ EP entitled, “Gutter Gaunt Gangster,” out October 11, 2011 on Esperanza Plantation. They spent the next six months touring with Junior Astronomers, Local H, North Mississippi All-Stars and The Meat Puppets.After signing with Kings of Leon’s new record label Serpents and Snakes, they re-released Gutter Gaunt Gangster September 25, 2012. Their second full length, Dear Bo Jackson was released in the spring of 2013. It was their first album with keyboardist Admiral Collier.Contact a speaker booking agent to check availability on The Weeks and other top speakers and celebrities.