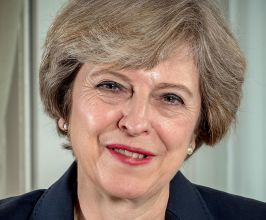 Book Theresa May for your event

Theresa May is a British politician serving as Prime Minister of the United Kingdom and Leader of the Conservative Party since 2016. She was first elected Member of Parliament (MP) for Maidenhead in the general election of 1997. Ideologically, she identifies herself as a one-nation conservative.The daughter of Zaidee Brasier (née Barnes) and Hubert Brasier, a vicar, May grew up in Oxfordshire. From 1977 until 1983, she worked for the Bank of England, and from 1985 until 1997 at the Association for Payment Clearing Services, also serving as a councillor for Durnsford in Merton. After unsuccessful attempts to be elected to the House of Commons in 1992 and 1994, she was elected as the MP for Maidenhead in the 1997 general election. From 1999 to 2010, May held a number of roles in the Shadow Cabinets of William Hague, Iain Duncan Smith, Michael Howard, and David Cameron, including Shadow Transport Secretary and Shadow Work and Pensions Secretary. She was also Chairman of the Conservative Party from 2002 to 2003.After the formation of a coalition government following the 2010 general election, May was appointed Home Secretary and Minister for Women and Equalities, giving up the latter role in 2012. Reappointed after the Conservative victory in the 2015 general election, she went on to become the longest-serving Home Secretary since James Chuter Ede over 60 years previously. During her tenure she pursued reform of the Police Federation, implemented a harder line on drugs policy including the banning of khat, oversaw the introduction of elected Police and Crime Commissioners, the deportation of Abu Qatada, the creation of the National Crime Agency and brought in additional restrictions on immigration.Following Cameron’s resignation, May won an unchallenged leadership election in July 2016, and was appointed Prime Minister, becoming the second woman to hold this position, after Margaret Thatcher. As Prime Minister, May began the process of withdrawing the UK from the European Union, triggering Article 50 in March 2017. In April 2017, May announced an early general election in June, with the aim of strengthening her hand in Brexit negotiations. This resulted in a hung parliament, in which the number of Conservative seats fell from 330 to 317, prompting her to broker a confidence and supply deal with Northern Ireland’s Democratic Unionist Party (DUP) to support May’s minority government.Contact a speaker booking agent to check availability on Theresa May and other top speakers and celebrities.