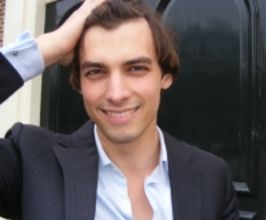 Book Thierry Baudet for your event

Thierry H.P. Baudet, LL.M. is a lawyer and historian who lectures at the Law Faculty of the University of Leiden. He also works on his PhD doctoral thesis under supervision of prof. Paul Cliteur on national identity, European unification, and multiculturalism. Besides this, he regularly organizes events for Justus Lipsius, the student association for legal philosophy, for example the debate on the controversial Deventer homicide case with Maurice de Hond and Ernest Louwes as guests (in April 2009).With a passion for debating, Baudet still in his twenties has managed to gain substantial experience as a chairperson, moderator and public speaker. At the age of sixteen he became a chair at international Model United Nations and continued to do so until university. He has chaired over ten Model United Nations conferences in a four-year period. Lobbying and drawing up resolutions, his role was to challenge groups of up to 400 young people from around the world – all representing a state or a non-governmental organisation with conflicting views on matters of global interest – to come up with workable compromises.As a student at the University of Amsterdam Thierry had his own radio talk show for which he roamed the country in search of thought-provoking interviews with politicians, writers, activists, and even Johan Cruyff appeared on his show. For this programme, he also organised “the greatest chocolate tasting in the world”, featuring Hanneke Groenteman and Wibi Soerjadi who outbid each other in chocolate indulgence. Continuing to pursue his interest in journalism Baudet later contributed to a programme as a reporter and occasional host on BNR Nieuwsradio for several years.Baudet is a representative of a new generation Europeans and has a refreshing perspective on matters of general concern. Not restricted by party loyalties, he feels that much public debate has lost its vitality and he strives to break through the stifled patterns of an older generation. One example of which, is the tendency to constantly apply labels such as ‘left’, ‘right’, ‘tolerant’ or ‘extreme’ that really only function to identify the ‘good guys’ from the ‘bad guys’. By going against the norm Baudet attempts to find new ways to bridge old political divides and to find common ground among sworn political adversaries.With this in mind, Baudet is currently editing a book that is to be published in 2010, featuring essays on the most important conservative philosophers of the 20th century. In conservatism, a political philosophy that has largely been neglected throughout the 20th century, Baudet finds interesting perspectives on current affairs, especially for those who want to take on a positive and forward-looking attitude.Another issue that interests Baudet is the relative obscurity in which the Dutch parliament operates. Most people are only familiar with the key party leaders. While the many backbenchers that daily take decisions in our name that concern us all, are almost completely unknown. To bring about a change in this situation, Baudet launched a website in 2007, publishing the political as well as personal profiles of all 150 members of the Dutch Parliament. He also personally interviewed them for this project. On the site, visitors can search through the biographical and political details of the representatives, and also use the ‘matchmaker’ function to find “your perfect MP’.In November 2008, Baudet was one of a group of six ‘young professionals’ that accompanied the Dutch Secretary of State (Maxime Verhagen) on his official visit to Morocco and Algeria. The visit to Algeria was focused mainly on issues concerning energy and resources. Following his experience in Morocco Baudet wrote an article for the Dutch quality newspaper De Volkskrant on Dutch immigration policy.With such a broad interest Baudet has organized and chaired a great deal of debates and discussions for over a decade, not only on political subjects but also on music and culture. Thierry Baudet is available as a chairperson, a moderator, and for lectures and panel discussions.Contact a speaker booking agent to check availability on Thierry Baudet and other top speakers and celebrities.