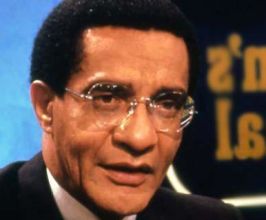 Book Tony Brown for your event

This media entrepreneur has been an innovator in many areas. Tony Brown has distinguished himself as a producer, bestselling author, educator, radio host, television commentator and film director. Now, he has entered the history books—not only in the arena of civil rights where he coordinated the largest march in history that was led by Martin Luther King, but also in the field of education.He was the first and founding dean, as well as professor, of the School of Communications at Howard University, where he established a highly distinguished academic and professional record. This unique accomplishment was recently enhanced by his appointment as the first dean of the Scripps Howard School of Journalism and Communications at Hampton University.Brown is the commentator of the PBS series Tony Brown’s Journal, the longest-running of all PBS series. Recently, Brown also became the first recipient of the National Director’s Legacy Award for Journalism from the US Department of Commerce’s Minority Business Development Agency (MBDA).Within weeks of that honor, this widely recognized out-of-the-box thinker was inducted into the National Academy of Television Arts & Sciences’ prestigious Silver Circle. With this honor, he joins such television icons as Walter Cronkite who “have made enduring contributions to the vitality of the television industry and set the highest standards of achievement for all to emulate.”This television commentator and self-empowerment advocate’s life embodies the American dream. In his latest release, a powerful and highly personal book, What Mama Told Me, Brown describes the seven core values, given to him by his Mama that have sustained his life and given it meaning. In other words, he writes, “Mama,” a maid and dishwasher in Charleston, West Virginia, gave him health, wealth, and happiness.Brown previously authored two powerful books, Black Lies, White Lies: The Truth According To Tony Brown, which sold 100,000 copies, and Empower The People, both published by William Morrow & Co., Inc. Brown is an active advocate of market solutions to social problems.But it is for his work as a journalist that he is best known. Brown’s weekly television series was recognized in the New York Daily News as “one of the top ten television shows of all time that presents positive Black images.” Tony Brown’s Journal was the only current program ranked in the top ten. The TV series was also nominated for the l991 NAACP Image Award for “Outstanding News, Talk or Information Series/Special.” Adding to Brown’s many exploits as a media expert, Tony Brown Chicago can be heard on WLS (890 AM), the Chicago ABC Radio Networks affiliate, and Disney ABC-owned station. He was selected by Talkers, the prestigious radio trade magazine, as one of “the 100 most important radio talk show hosts in America.”Called “Television’s Civil Rights Crusader” in a cover story by Black Enterprise magazine, this educator and lecturer coordinated a march in Detroit that featured Martin Luther King, Jr. and drew an estimated 500,000, perhaps the largest civil rights march in America. It is also believed to be the first time Dr. King delivered his famous “I Have A Dream” speech. USA Today recently selected him as one of the top five leaders to analyze the status of Black America.The Sales and Marketing Executives International Academy of Achievement awarded Brown the Ambassador of Free Enterprise Award because of his “interest in creating jobs and business through the Buy Freedom Network.” Previous Academy inductees include: Henry Block of H & R Block and J.C. Penney of J.C. Penney Company. He is the recipient the 1995 Educator of the Year Award and previously received the Communicator of the Year Award from the Academy’s national board of trustees. Previous winners of this prestigious award include the heads of TBS, CBS, ABC, CNN and several of the major newspaper chains and national publications. He is the first Black to receive either honor. The Institute for American Business recently recognized Brown’s work in economic and community development with its 1993 Community Service Award. He received The Economic Empowerment Award from the Southern Christian Leadership Conference (S.C.L.C.) for “his vision of economic parity.” Other awards include the Black Emmy Award, the Image Award by the NAACP in Hollywood and the Solomon Carter Fuller Award by the nation’s leading organization of Black psychiatrists for promoting self-esteem through education, broadcasting, and movie distribution.Brown also founded the annually-held Black College Day in 1980 and, as the honorary chairperson of the National Organization of Black College Alumni, Inc., spearheads a movement to preserve Black colleges. The US Congress has since officially designated Brown’s choice, the last Monday in September, as a national observance. His community activities include: member of the Board of Trustees of The Shaw Divinity School; member of the National American Slavery Memorial Advisory Board; advisor to the Harvard Foundation for Intercultural and Race Relations; and the Board of Directors of the Association for the Study of Afro-American Life and History.Brown was born in Charleston, West Virginia, where he graduated from Garnet High School. He received his Bachelor’s degree in Sociology and his Master’s degree in Psychiatric Social Work at Wayne State University in Detroit. He has received numerous honorary doctorate degrees for his achievements in civil rights, education, economics and journalism. His motto is “Self Help.” His call to action is very explicit: No Black Lies, No White Lies – Only The Truth!Contact a speaker booking agent to check availability on Tony Brown and other top speakers and celebrities.