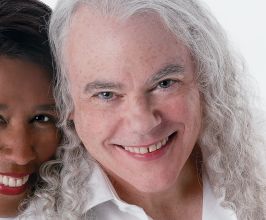 Book Tuck and Patti for your event

For nearly three decades, this unique vocal/guitar jazz duo has cast its passionate musical spell worldwide, capturing the hearts of lovers, the respect of jazz buffs, and the jaw-dropping awe of guitarists.With 29 years of performing together, and 26 years of marriage, the devotion forged by this extraordinary couple shows no sign of dimming from the pressure of familiarity.For years, Tuck and Patti played in various Bay Area bands without meeting. Tuck, introspective and unambitious, contrasted with Patti’s persona of bandleader, one who would and did jam with every hot musician in the area. In 1978, Tuck was already a guitarist for a cover band when Patti walked in to audition. “Within a few seconds of hearing her sing,” recalls Tuck, “I knew I had found my lifetime musical partner.”They realized they both had such extensive musical backgrounds that they knew hundreds of songs in common. They formed a duo, guitar and vocalist. Though Joe Pass and Ella Fitzgerald were an inspiration and model, landing live gigs with this sparse instrumentation took a little persuasion. Once booked, however, the rooms quickly filled with repeat fans. ‘We had never had so much fun, nor been so challenged,” says Tuck. “We went to play at a venue and forgot to take breaks.”For this duo, from then on, there has not been a break. Friendship and collaboration grew to love, and the two were married in 1981. Their recording career took off when Windham Hill Jazz signed them for 1988’s groundbreaking “Tears of Joy.” This and several other Windham Hill albums put them on the map, and they’ve been solidifying their career, their musical conversation, their technique, and their love together ever since.Tuck and Patti now have their own recording studio, as well as their own record label, T&P Records, which licenses their CDs to major labels for distribution around the world. They tour Asia and Europe so much that they know that home is with each other, regardless of location. They are looking forward to, at long last, taking occasional time off from touring to teach at their Bay Area home, as well as doing workshops while on tour. A concert DVD, “Tuck & Patti Live in Holland,” with a behind-the-scenes documentary, “As We Travel Round this Circle,” was released in 2005.Their newest album, “I Remember You,” was released through Universal Music October 10, 2007 in Asia, and through Artist Garage in the US in September, 2008. What’s on the album? Love songs of course, from the Great American Songbook, inspired by Ella Fitzgerald and Joe Pass.Contact a speaker booking agent to check availability on Tuck and Patti and other top speakers and celebrities.