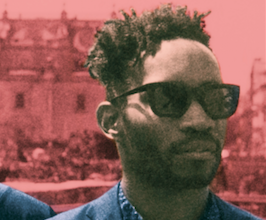 Unknown Mortal Orchestra is an American and New Zealand rock band composed of singer, guitarist and songwriter Ruban Nielson, bassist Jake Portrait, keyboardist Quincy McCrary, and drummer Riley Geare. The band was started by Nielson (formerly of The Mint Chicks).Singer and guitarist Ruban Nielson released the track “Ffunny Ffrends” on his Bandcamp profile in the spring of 2010. It was paired with no further information and notably no mention of who created it. Soon, popular bloggers got hold of the track. Through their reposting and attempts to hunt down the creator, Nielson eventually claimed the track as Unknown Mortal Orchestra’s.The band’s debut self-titled album was released June 21, 2011 on Fat Possum Records. The album quickly received critical acclaim. Pitchfork gave the album an 8.1, describing that with “an expert use of space rare for such a lo-fi record, UMO manages a unique immersive and psychedelic quality without relying on the usual array of bong-ripping effects.”In the spring of 2012, the band won the Taite Music Prize for the album. Although the nominated Unknown Mortal Orchestra did not win Best Alternative Album, Nielson took home the title of Best Male Artist at the 47th annual Vodafone New Zealand Music Awards.In September 2012, Unknown Mortal Orchestra announced that they had signed to Jagjaguwar and were working on their second full-length album. Unknown Mortal Orchestra’s second album, II, was released on February 5, 2013. The first single from the album, entitled “Swim and Sleep (Like a Shark)”, was first available as a 7″ on their tour with Grizzly Bear.II has received widespread critical acclaim. In November 2013 it won Best Alternative Album at the New Zealand Music Awards. II was nominated for the Taite Music Prize 2014, an annual music prize awarded for the best album from New Zealand. Clash Music gave the album a 9 out of 10, saying “from opener ‘From The Sun’, which recalls George Harrison-psychedelia, to the tender Family Stone shuffle of the closing of ‘Secret Xtians’, ‘II’ displays both a glowing warmth in its production and a deft use of space that illuminate Nielson’s superbly crafted compositions.” Paste Magazine called the album “a modern, beat-heavy take on ‘60s psych, with plenty of hooks and fuzz to get you hooked and feeling fuzzy.” NME praised Ruban’s ability to turn his songs into “works of warm, fuzzy beauty.”During the winter of 2012, Unknown Mortal Orchestra capitalized on the success of II and embarked on a world tour. The tour started off with shows in Australia, and hometown shows in New Zealand, followed by several stops in Europe. The band then toured extensively throughout North America with opener Foxygen. In March 2013, Unknown Mortal Orchestra was named one of Fuse TV’s 30 must-see artists at SXSW. Unknown Mortal Orchestra consistently sold out shows in both the UK/Europe and in North America, and as a result of their success on the road they announced in early April that they would extend their tour through the end of 2013. That summer the band performed at a number of major European festivals, including Roskilde Festival, Pukkelpop and Lowlands.On February 25, 2013, Unknown Mortal Orchestra made their American television debut, performing “So Good At Being In Trouble” on Late Night with Jimmy Fallon.On October 29, 2013, the band released an EP titled Blue Record. It included three acoustic versions of songs taken from their previous album.On February 5, 2015, the band announced their third studio album, Multi-Love. Soon after, they released the title track as the first single, which was designated “Best New Track” by Pitchfork.[12] Multi-Love was released on May 26, 2015. It was well received by critics. Rolling Stone commented that “Multi-Love sees Nielson coloring outside the lines for a vibrant vision of connection” and Pitchfork praised Nielson’s ear for how something should sound and referred to the album as his “most accomplished”. Singles “Multi-Love” and “Can’t Keep Checking My Phone” were both A-listed at BBC’s 6 Music.Following the release, UMO embarked on a tour through the UK, Europe, the US and Canada, with many sold out dates. They are currently back touring in Europe through November, before heading to Australia and New Zealand for a string of headline shows in December. On August 12, UMO performed Multi-Love on Late Night with Seth Meyers. On August 25 they performed “Can’t Keep Checking My Phone” on Conan. On February 16, 2016 the band performed on Last Call with Carson Daly. “Can’t Keep Checking My Phone” on Conan. On February 16, 2016 the band performed on Last Call with Carson Daly. “Can’t Keep Checking My Phone” also appears in the association football video game FIFA 16.Contact a speaker booking agent to check availability on Unknown Mortal Orchestra and other top speakers and celebrities.