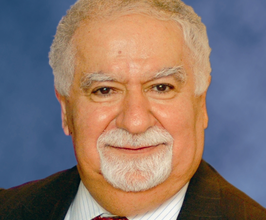 Book Vartan Gregorian for your event

Vartan Gregorian is the twelfth president of Carnegie Corporation of New York, a grant-making institution founded by Andrew Carnegie in 1911. Prior to his current position, which he assumed in June 1997, Gregorian served for nine years as the sixteenth president of Brown University.He was born in Tabriz, Iran, of Armenian parents, receiving his elementary education in Iran and his secondary education in Lebanon. In 1956 he entered Stanford University, where he majored in history and the humanities, graduating with honors in 1958. He was awarded a Ph.D. in history and humanities from Stanford in 1964.Gregorian has taught European and Middle Eastern history at San Francisco State College, the University of California at Los Angeles, and the University of Texas at Austin. In 1972 he joined the University of Pennsylvania faculty and was appointed Tarzian Professor of History and professor of South Asian history. He was founding dean of the Faculty of Arts and Sciences at the University of Pennsylvania in 1974 and four years later became its twenty-third provost until 1981.For eight years (1981-1989), Gregorian served as a president of the New York Public Library, an institution with a network of four research libraries and eighty-three circulating libraries. In 1989 he was appointed president of Brown University.Gregorian is the author of The Road to Home: My Life And Times, Islam: A Mosaic, Not A Monolith, and The Emergence of Modern Afghanistan, 1880-1946. A Phi Beta Kappa and a Ford Foundation Foreign Area Training Fellow, he is a recipient of numerous fellowships, including those from the John Simon Guggenheim Foundation, the American Council of Learned Societies, the Social Science Research Council and the American Philosophical Society. He is a Fellow of the American Academy of Arts and Sciences, and the American Philosophical Society. In 1969, he received the Danforth Foundation’s E.H. Harbison Distinguished Teaching Award.He serves on several boards including the National September 11 Memorial and Museum, and the American Academy in Berlin. He served on the boards of the J. Paul Getty Trust, the Aga Khan University, the Qatar Foundation, the McGraw-Hill Companies, Brandeis University, Human Rights Watch, The Museum of Modern Art and the Bill and Melinda Gates Foundation. He has been decorated by the French, Italian, Austrian and Portuguese governments. His numerous civic and academic honors include scores of honorary degrees, including those from Brown, Dartmouth, Drew, Johns Hopkins, University of Pennsylvania, the Jewish Theological Seminary, the City University of New York, Rutgers, Tufts, New York University, University of Aberdeen, the Juilliard School, the University of Illinois at Urbana-Champaign, Fordham University, San Francisco State University, University of Notre Dame, Carnegie Mellon University, and most recently, Keio University, University of Miami, and the University of St. Andrews.In 1986, Gregorian was awarded the Ellis Island Medal of Honor and in 1989 the American Academy and the Institute of Arts and Letters’ Gold Medal for Service to the Arts. In 1998, President Clinton awarded him the National Humanities Medal. In 2004, President Bush awarded him the Presidential Medal of Freedom, the nation’s highest civil award. In 2009, President Obama appointed him to the White House Fellowships Commission. He has been honored by various cultural and professional associations, including the Urban League, the League of Women Voters, the Players Club, PEN-American Center, Literacy Volunteers of New York, the American Institute of Architects , the Charles A. Dana Foundation, and the Elysium Between Two Continents. He has been honored by the city and state of New York, the states of Massachusetts, Texas, Pennsylvania, and Rhode Island, and the cities of Fresno, Austin, Providence and San Francisco.Contact a speaker booking agent to check availability on Vartan Gregorian and other top speakers and celebrities.