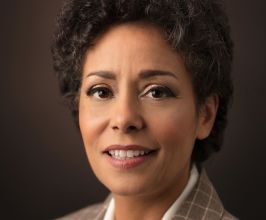 Admiral Michelle Howard is a 1978 graduate of Gateway High School in Aurora, Colorado. She graduated from the United States Naval Academy in 1982 and from the Army’s Command and General Staff College in 1998, with a master’s in military arts and sciences.Howard’s initial sea tours were aboard USS Hunley (AS 31) and USS Lexington (AVT 16). While serving aboard Lexington, she received the secretary of the Navy/Navy League Captain Winifred Collins award in May 1987. This award is given to one woman officer a year for outstanding leadership. She reported to USS Mount Hood (AE 29) as chief engineer in 1990 and served in Operations Desert Shield and Desert Storm. She assumed duties as first lieutenant on board the USS Flint (AE 32) in July 1992. In January 1996, she became the executive officer of USS Tortuga (LSD 46) and deployed to the Adriatic in support of Operation Joint Endeavor, a peacekeeping effort in the former Republic of Yugoslavia. Sixty days after returning from the Mediterranean deployment, Tortuga departed on a West African training cruise, where the ship’s Sailors, with embarked Marines and U.S. Coast Guard detachment, operated with the naval services of seven African nations.She took command of USS Rushmore (LSD 47) March 12, 1999, becoming the first African American woman to command a ship in the U.S. Navy. Howard was the commander of Amphibious Squadron 7 from May 2004 to September 2005. Deploying with Expeditionary Strike Group (ESG) 5, operations included tsunami relief efforts in Indonesia and maritime security operations in the North Arabian Gulf. She commanded Expeditionary Strike Group 2 from April 2009 to July 2010. In 2009, she deployed to U.S. Central Command theater, where she commanded Task Force 151, Multi-national Counter-piracy effort, and Task Force 51, Expeditionary Forces. In 2010, she was the Maritime Task Force commander for Baltic Operations, under U.S. 6th Fleet.Her shore assignments include, J-3, Global Operations, Readiness and executive assistant to the Joint Staff director of Operations; deputy director N3 on the OPNAV staff; deputy director, Expeditionary Warfare Division, Office of the Chief of Naval Operations (OPNAV) staff; senior military assistant to the secretary of the Navy; chief of staff to the director for Strategic Plans and Policy, J-5, Joint Staff, deputy commander, U.S. Fleet Forces Command, deputy chief of naval operations for operations, plans & strategy (N3/N5); and the 38th vice chief of naval operations.Contact a speaker booking agent to check availability on Vice Admiral Michelle Howard and other top speakers and celebrities.