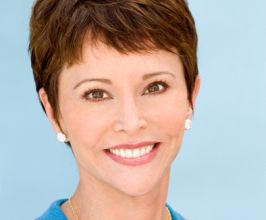 Book Vicki Iovine for your event

Vicki Iovine is the happy and chronically overwhelmed mother of four children. (Five if you count her husband, and what wife doesn’t?) Along with being a mother, Iovine is the celebrated author of the highly successful Girlfriends Guide series that immediately found its niche with the hip and innovative “Girlfriends’ Guide to Pregnancy,” which has been reprinted 41 times and translated into twelve languages. It was followed by the equally beloved, Girlfriends’ Guide to Surviving the First Year of Motherhood,” and, keeping up with Vicki’s own life experience, “Girlfriends’ Guide to Toddlers,” was published just in the nick of time for those Girlfriends on Vicki’s reproductive timeline. To offer her no-holds-barred stories of women trying to reenter the real world of careers, compromises and, of course, love and sex after the kids were in school or daycare for at least four hours a day, “The Girlfriends’ Guide to Getting Your Groove Back,” was the fourth in the series.Branching out into feature films, Iovine and Academy Award winning screenwriter, Ron Bass, wrote and sold Ghost Wife to 20th Century Fox. To celebrate the tenth anniversary of “Pregnancy,” she updated the perennial favorite of moms-to-be with new chapters on fashion, infertility, medical care and relationships for a publishing date of January 2007. Next on her schedule is “Girlfriends’ Guide to Teenagers,” something she is learning more about than she even wanted to know.While raising four kids is full-time work, Iovine has been a columnist for several magazines ,including a monthly column in Child. a bi-monthly column for Redbook and a weekly column devoted to family life in the Los Angeles Times. She was also the parenting contributor for Today, a frequent guest host on Later Today and has appeared several times on Oprah, Good Morning America and The View.Iovine also has served on the Board of Directors of Special Olympics International, the sports training program for people with mental retardation. Along with her husband, Jimmy, and Bobby Shriver, she produced A Very Special Christmas an original collection of superstars of rock and rap singing traditional and original holiday songs that has contributed more than $110 million to the international sports program for people with mental retardation. She was also named Florence Crittendon Woman of the Year in recognition of her work for teenage mothers and for girls with mental retardation in South Central Los Angeles. Her family has joined her in her 17-year support of Project Angel Food, a hot meal delivery service for people with AIDS and other life-threatening disease. The Iovines are underwriting the purchase of a new kitchen and they make some tasty sugar cookies on their days in the old kitchen.A Southern California native, Vicki Iovine graduated summa cum laude and Phi Beta Kappa from the school of Journalism at the University of California, Berkeley. She then proceeded to receive an Ll.B degree in Public International Law from Cambridge University, England. Iovine also earned her J.D. from the University of California, Hastings College of Law and is currently a member of the California Bar Association. She was Miss September in Playboy in the famous issue Women of the Ivy League, but she refuses to divulge the year it appeared or her maiden name.The writer has been married for 21 years to Jimmy Iovine, Chairman of Interscope, Geffen, A&M Records, and is the mother to James (19), Jessica (17), Jeremy (15) and Jade (13).Contact a speaker booking agent to check availability on Vicki Iovine and other top speakers and celebrities.