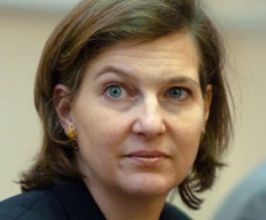 Victoria Nuland was ambassador of the United States to the North Atlantic Treaty Organization until Kurt Volker was sworn in as U.S. Permanent Representative to NATO on July 2, 2008.

Book Victoria Nuland for your event

Victoria Nuland was ambassador of the United States to the North Atlantic Treaty Organization until Kurt Volker was sworn in as U.S. Permanent Representative to NATO on July 2, 2008.A career Senior Foreign Service officer, she was Principal Deputy National Security Advisor to Vice President Cheney from July 2003 until May 2005, where she worked on the full range of global issues, including the promotion of democracy and security in Iraq, Afghanistan, Lebanon and the broader Middle East.Nuland was the Deputy Permanent Representative to NATO from July 2000 to July 2003. There she was instrumental in NATO’s invocation of Article 5 of its charter – “an attack on one ally is an attack on all” – in support of the United States after September 11, 2001. She also worked intensively on the enlargement of the Alliance to include seven new members, the creation of the NATO-Russia Council, NATO’s first deployment “out of area” to Afghanistan and its defense of Turkey during Operation Iraqi Freedom.From 1997 to 1999, Nuland was Deputy Director for former Soviet Union affairs at the United States Department of State, with primary responsibility for U.S. policy towards the Russian Federation and the Caucasus countries. In that capacity, she was awarded the Secretary of Defense’s Distinguished Civilian Service medal for her work with the Russians during the Kosovo air campaign.Nuland has twice been a visiting fellow at the Council on Foreign Relations. In 1999 to 2000, she looked at the effect of Anti-Americanism on U.S. relations with other major world powers as a “Next Generation” Fellow at the Council, and from 1996 to 1997, as a State Department Fellow, she directed a CFR task force on “Russia, its Neighbors and an Expanding NATO,” which was chaired by Senator Richard Lugar.From 1993 to 1996, Nuland was chief of staff to Deputy Secretary of State Strobe Talbot with whom she worked on the nuclear disarmament of Ukraine, Kazakhstan and Belarus, Bosnia and Kosovo policy and the U.S. intervention in Haiti, among other issues. From 1991 to 1993, she covered Russian internal politics at the U.S. Embassy in Moscow focusing on Boris Yeltsin and his government. She has also served on the Soviet Desk (1988-1990), in Ulaanbaatar, Mongolia where she helped open the first U.S. Embassy (1988), in the State Department’s Bureaus of East Asian and Pacific Affairs (1987) and in Guangzhou, China (1985-1986).Nuland is the daughter of Yale bioethics and medicine professor Sherwin B. Nuland. She graduated from Choate Rosemary Hall in 1979 and has a B.A. from Brown University. Nuland is married to political scientist Robert Kagan, with whom she has two children, David and Elena. She speaks Russian and French, and some Chinese.Contact a speaker booking agent to check availability on Victoria Nuland and other top speakers and celebrities.