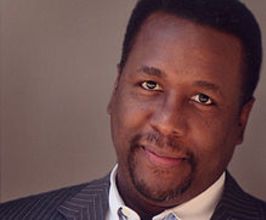 Author and Actor, best known for “The Wire” and HBO’s “Treme”

Book Wendell Pierce for your event

Wendell Pierce is recognized by film audiences for his extensive work for directors including Woody Allen, Spike Lee, Brian De Palma, Barry Levinson, Sidney Lumet and Paul Schrader. Hailed for his portrayal of Det. Bunk Moreland on five critically acclaimed seasons of ‘The Wire,’ his next series ‘Treme’ reunites him with the same creative team: HBO, David Simon, and Eric Overmyer. Wendell is a native of New Orleans, and has worked to rebuild the neighborhood in which he was raised. He formed Ponchartrain Park Neighborhood Association, a non-profit corporation, to rebuild 350 affordable and environmentally friendly homes which will preserve the community character and help longtime residents come back to their neighborhood.Wendell starred in ‘Life Support’ for HBO (opposite Queen Latifah), which garnered him a NAACP Image Award. He appeared as himself in Spike Lee’s documentary ‘When The Levees Broke,’ telling his family’s story of loss after Katrina. He starred in ‘Stay Alive’ for Disney, the award winning ‘Ray’ (based on the life of Ray Charles) for director Taylor Hackford, Wim Wenders’ ‘Angst & Alienation in America,’ and ‘Hole in One.’ Pierce’s large body of work includes ‘The Fighting Temptations,’ ’24 Hour Woman,’ ‘Brown Sugar,’ ‘Volcano,’ ‘Abilene,’ ‘Bullworth,’ and Spike Lee’s ‘Get on the Bus.’ His filmography also includes ‘Sleepers,’ ‘Waiting to Exhale,’ ‘Hackers,’ ‘Bye Bye Love,’ ‘It Could Happen To You,’ ‘Manhattan Murder Mystery,’ ‘Malcolm X,’ ‘Husbands and Wives,’ ‘A Rage in Harlem,’ ‘Bonfire of the Vanities,’ ‘Casualties of War,’ ‘Family Business,’ ‘Ishtar,’ ‘Patty Hearst’ and ‘The Money Pit.’ Upcoming 2010 releases include the indie film ‘Bolden’ and Taylor Hackford’s ‘Love Ranch,’ starring Helen Mirren.In addition to ‘The Wire,’ Pierce has had regular roles on ‘The Weber Show’ for NBC, CBS’s ‘Gregory Hines Show,’ ‘Maloney,’ and ‘The Brian Benben Show,’ and has had recurring roles on shows including ‘Numb3rs,’ ‘Law & Order,’ ‘Third Watch,’ ‘New York Undercover’ and ‘I’ll Fly Away.’ Pierce’s credits also include the ABC miniseries ‘Advocate’s Devil,’ the CBS telefilm ‘Never Give Up: The Jimmy V Story,’ the HBO projects ‘Strapped’ and ‘Vietnam War Story: The Pass,’ and the BBC miniseries ‘With Two Lumps Of Ice.’Heralded for his work in the world premiere of ‘Queenie Pie’ at the Kennedy Center, Pierce includes among his Broadway stage credits roles in ‘The Piano Lesson,’ ‘Serious Money’ and ‘The Boys of Winter.’ He received rave reviews for ‘The Cherry Orchard’ at the Classical Theatre of Harlem (nominated for a VIV award in the lead actor category). He followed up with ‘Waiting For Godot’ (set on a rooftop surrounded by water in a post Hurricane Katrina New Orleans). Next up, Pierce will reprise his role in ‘Broke-ology,’ which debuted at the Williamstown Theatre Festival and will be staged at Lincoln Center in NYC in the fall of 2009.Pierce is a three-time NAACP Image Award Nominee for Best Actor in a television drama for his work on ‘The Wire,’ and won the 2008 Image Award for best actor in a television movie for HBO’s ‘Life Support’ as well as the Women’s Image Network “WIN” Award.Contact a speaker booking agent to check availability on Wendell Pierce and other top speakers and celebrities.